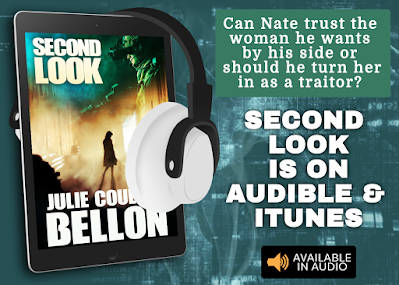 I am SO EXCITED! It feels like I've been waiting forever, but Second Look is now available in audiobook, so you can get it on Audible and iTunes!
As you all know, my narrator, Tristan Wright is incredible and truly makes the characters come to life. I love listening to him capture their voices and the story! I think you'll love it, too.
Get your audio book here
Here's the back copy:
With everything on the line, can Nate trust the woman he wants by his side, or should he turn her in as a traitor?

When the most wanted terrorist in the world escapes from a high security prison, Nate Hughes is part of the task force sent to recapture him. During the mission, he meets Abby, a fellow investigator that seems to have it all together. He's drawn to her and hopes they can join forces, but when her past is revealed, loyalties are called into question. Could she have turned against the country she once held dear?

The CIA wants her captured and interrogated, but with a terrorist attack imminent, Abby may be the only person in a position to help them stop it. Nate must make a choice to either trust her or turn her in - but the wrong decision would clear the path for the largest attack on freedom the world has ever seen.

And time is running out.

Posted by Julie Coulter Bellon at 9:30 AM