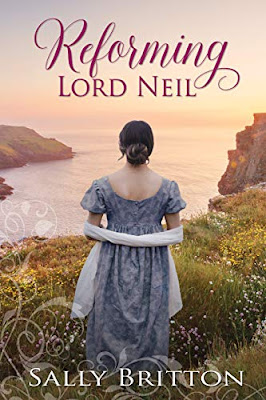 If you need a regency romance to read, Sally Britton's, Reforming Lord Neil is free today! I haven't read this one personally, but I've read other books by Sally Britton and really enjoyed them!

Get your free copy HERE

An arrogant lord cut-off by his family. A penniless widow in desperate need. In their reduced circumstances, can love save them both?

Lord Neil Duncan, third son of the Marquess of Alderton, finally angers his father enough to be cut off from the family. Neil believes it is only a matter of time before he is reinstated, but time is passing slowly and he needs to eat. His so-called friends have abandoned him, no one else trusts him, and it is not until he comes upon a young widow that he finds someone who needs his help as badly as he needs hers.

Teresa Clapham has been without a husband's provision and protection for over a year. Supporting her mother and daughter on the pittance her brother-in-law provides has required her to stretch every farthing. When Lord Neil arrives at her doorstep proposing he work for her to earn his keep, she sees possibility in the man everyone else has deemed an arrogant good-for-nothing.

As Lord Neil works for the first time in his life, Teresa sees in him a tender heart long repressed by his family's expectations - a heart that causes her own to open once more. But her brother-in-law Frederick Clapham is less charmed by Teresa’s new servant. When Lord Neil discovers the secret Mr. Clapham has been keeping, he must decide whether to embrace the man Teresa believes him to be, or fall back on the privileged lifestyle he’s always known.
Posted by Julie Coulter Bellon at 4:32 PM No comments: 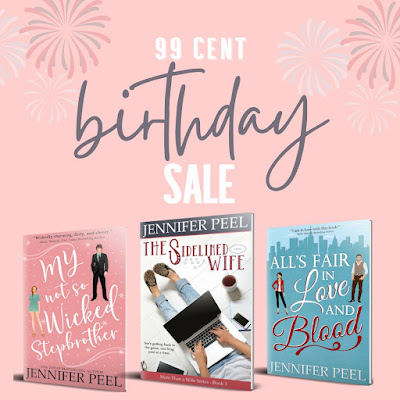 Jennifer Peel is having a .99 cent birthday sale on three of her books! If you need something cute and fun to read this weekend, you'll definitely want to pick these up.
All's Fair in Love and Blood--this one was cute and has all the feels! Get your sale copy HERE

The Sidelined Wife--I haven't read this one, but I will now! Get your sale copy HERE

My Not-So-Wicked Stepbrother--the first Jennifer Peel book I ever read! Loved it. Get your sale copy HERE
Posted by Julie Coulter Bellon at 11:00 AM No comments:

A Tale of the Book from the Thrift Store 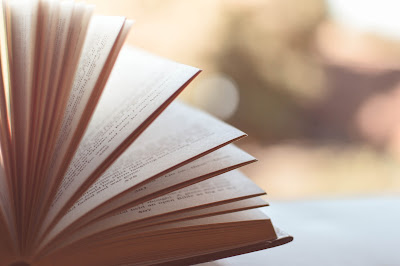 My husband bought a book at a thrift store and after he brought it home and started reading it, he noticed it didn't lay flat. Thumbing through the pages, he found a woman's checkbook with about thirty unused checks tucked in the back. He contacted her immediately and she told him she had moved recently and donated a lot of books, but she had no idea how her checkbook would have gotten in one! She was so relieved to have it returned to her and grateful that there are still good people in the world. (If you know my husband, you know he is good to the core and I love that about him!)
My lesson learned is that from now on, I think I'm going to double-check every item that is set to be donated to the thrift store before I donate it, just in case! You just never know what gets tucked into things.
Posted by Julie Coulter Bellon at 11:30 AM No comments:

In the Non-Fiction Corner with Lauren: Old Testament Insights

Old Testament Insights takes us on a deep-dive of the Old Testament through many chapters, each written by a different author. These authors cover stories that are more familiar to us like Cain and Abel and Esther, but also expound on what we can learn from lesser known stories like Jeremiah and Hosea. Many of these chapters focus on sacrifice, which is a major theme of the Old Testament. This book definitely enhanced my knowledge of the Old Testament and made me excited for this year and what Come Follow Me has in store!
One of my favorite chapters of the book talks about Shiprah, Puah, and Deborah. The author starts out talking about how Christ is the light of the world, and how sacrifice is an essential part of the gospel of Jesus Christ. As we sacrifice and obtain a broken heart and a contrite spirit, others can see the Light of Christ through us. Shiprah and Puah are two biblical examples of women spreading their light to others, even though they lived in a very dark time. These women were midwives during a time when Pharaoh had commanded all the male babies to be killed. But Shiprah and Puah believed in the sanctity of life, and refused to be a part of this violence. Because they stood up for what was right, they were blessed by the Lord. This story is told in eight verses in the Old Testament, but we can learn so much from others perspectives as we study the Old Testament this year and this book will add more depth and perspective to our Old Testament knowledge.
Get your copy here
Here's the back copy:
We are instructed to offer unto the Lord a broken heart and a contrite spirit, a concept taught in Psalms 34:18, which is at the heart of the prophetic teachings on sacrifice and in the lived experiences of people in every age. But what does the phrase "broken heart and contrite spirit" mean, and what does God require of you? Old Testament Insights, featuring a compilation of essays from twenty gospel scholars, provides clarity for readers on the eternal principle of personal sacrifice, both as taught throughout the Old Testament and in its modern application.

Featuring multiple perspectives on the practice of sacrifice, this powerful volume offers valuable insight into our Heavenly Father's expectations for His covenant people. By looking to the experiences of individuals in scripture to anchor discussion, contributors weave together an in-depth explanation of the law of sacrifice and the true and eternal value of turning to the Lord with a broken heart and a contrite spirit.
Posted by Julie Coulter Bellon at 10:00 AM No comments: 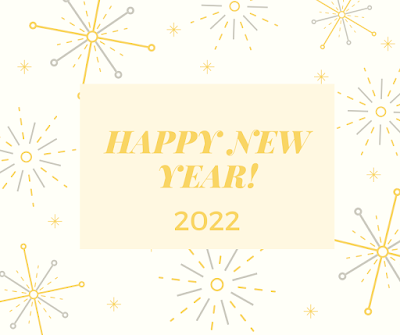 Well, 2021 changed my life in ways I could never have imagined. I'm so grateful for the miracle I received, for the joy in my heart to be here to celebrate another year with those I love. I'm so grateful for my husband, my children, my daughters-in-law, my grandchildren, and for my extended family and friends. I am blessed to have you in my life!

And I'm grateful for you, my readers, as well. I've needed your support and you have stepped up for me. Thank you!

I'm so glad I'm turning the page on this last year and I'm looking forward to a new year with you all. I hope 2022 is full of love, happiness, and good books.

Posted by Julie Coulter Bellon at 9:40 PM No comments:

What Were the Top Three AOTP Podcasts This Year? 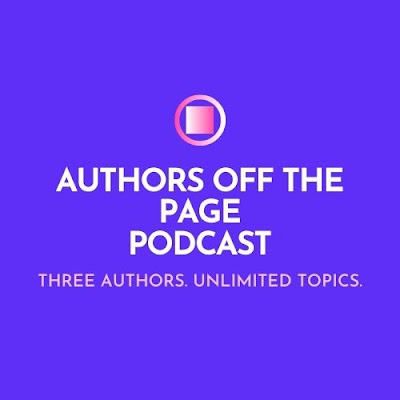 As you know, I'm part of the Authors Off the Page podcast, (we're starting our third season next month!) and if you are one of our listeners, (even if you're not) here is an interesting statistic!

Our top three most listened-to shows in 2021 were:

1. Werewolves, Vampires, and All Things Halloween

2. All the Best Gifts

3. Do You Have a Favorite Meet-Cute (And Would You Like to Know Ours?)

I'm not surprised the Halloween episode is our top listen. I laughed pretty hard during that one! But I'm just so proud of our podcast. We have had so much fun with it in the last two years and I can't wait for this year. Getting to know Becky Monson and Jennifer Peel has been a highlight in my life! And they are so funny. I could just sit and laugh with them all day.
Do you have a favorite episode from last year?
Posted by Julie Coulter Bellon at 12:00 PM No comments: 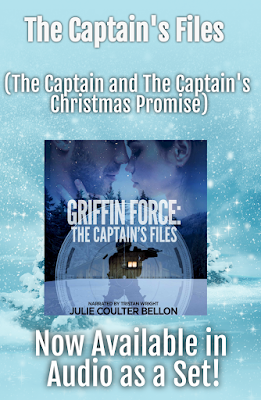 I am so excited to announce that my full-length romantic suspense novel, The Captain, and The Captain's Christmas Promise, more of Colt and Brenna's story in an action adventure Christmas romance, are now together in an audiobook boxed set! My narrator, Tristan Wright, is phenomenal and The Captain was a RONE Award finalist for Best Audiobook of the Year.
You can get your copy HERE
Here is the back copy:
Captain Colt Mitchell is part of the elite Griffin Force task force hunting down the world's most dangerous terrorists. In this boxed set, you'll get the full-length novel, The Captain, where Colt's mission is anything but textbook, and a novella, The Captain's Christmas Promise, a Christmas adventure romance, all in one set! You won't want to miss a minute of The Captain's Files.

Top-secret missions. An unexpected chance for love. And everything is on the line.

A captured operative. A deep-cover intelligence officer. And a dangerous game that could cost them their lives - and hearts.

Captain Colt Mitchell is part of the elite Griffin Force team hunting down terrorist Nazer al-Raimi. After an attack on the Canadian Parliament buildings, the team gets good intel on Nazer's whereabouts. They plan to grab him, but when the mission goes wrong, Colt is captured and dragged away. Bruised, restrained, and disoriented, Colt is stunned to see Brenna Wilson, the Canadian intelligence officer who broke his heart years ago, standing next to Nazer. But how deep is she in the operation, and can she help Colt escape?

A Christmas they won't forget....

After spending every waking moment hunting the world’s most-wanted terrorist, Colt Mitchell and Brenna Wilson decide to take a break and go home for the Christmas holidays. The minute they touch down on Canadian soil, however, they are pulled into an international conspiracy that would leave the son of a Kuwaiti diplomat dead. Colt and Brenna finally locate the target, but a contract killer is hot on their trail. Retreating to the Canadian wilderness to keep everyone safe, they'll need all their skills - and maybe a Christmas miracle - to make it out alive.
Posted by Julie Coulter Bellon at 12:30 PM No comments: