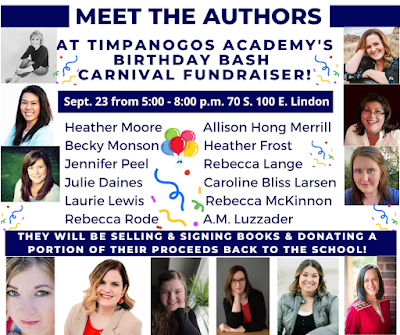 If you are going to be anywhere in Utah County on Friday, Sept. 23rd, there is a really fun Mini-book Festival going on for a good cause. So many great authors are coming together to sign and sell their books, and then they'll donate a portion of their proceeds back to the school. Timpanogos Academy is trying to raise enough money to purchase a new sound system. Every child deserves to be heard!

So come and see your favorite authors and buy some books! (I'll be there, too!)

Posted by Julie Coulter Bellon at 9:30 AM No comments: 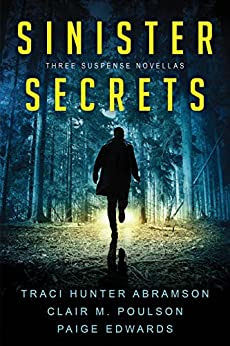 I am SO excited to announce that we will be discussing the new novella collection, Sinister Secrets, on Sept. 27 at 7:00 p.m. MT with author Paige Edwards! I loved her story and can't wait to hear more about the behind-the-scenes details. If you love suspense, you won't want to miss this book club! You can find us on the Book Chat Book Club Facebook page.

Posted by Julie Coulter Bellon at 9:30 AM No comments: 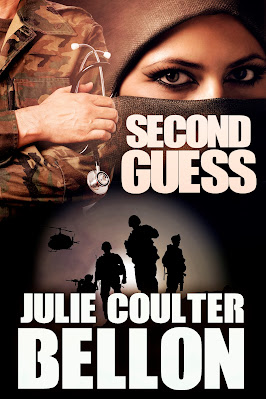 As all of you know, I've been struggling with health issues that have severely limited my writing. It's been frustrating for me, but I've had to learn patience. It has not been easy at all, but just in the last couple of weeks, the stories in my head are starting to come back and I'm feeling more writerly, if that makes any sense. I've been tinkering with my Second Guess novel and guess what? I've edited the first ten chapters! It feels SO GOOD!

I would LOVE to release this book soon. I'm trying not to get my hopes too high, but this is the most optimistic I've been in months, so I wanted to share. Thank you for sticking by me!

Posted by Julie Coulter Bellon at 9:34 PM No comments: 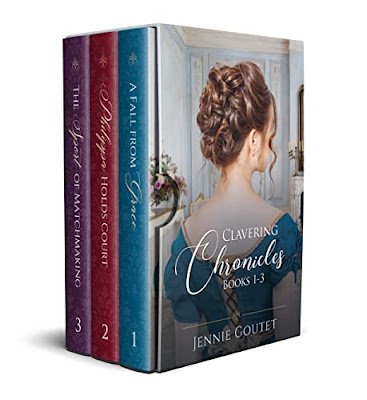 If you are a historical romance fan, then this might be the deal for you!
Jennie Goutet's Clavering Chronicles series of three historical romance novels is on sale today for only .99 cents! I haven't read anything by Ms. Goutet, but she comes highly recommended and I think this set is going to move up on my TBR list!
Get your boxed set copy HERE
Here's the back copy:
A FALL FROM GRACE

Selena Lockhart comes with neither dowry nor connections, and she knows better than to expect Society to give her a welcome—especially after her father gambled away his fortune, precipitating the family’s sudden fall from grace and Selena’s betrothed to break off their engagement. It therefore comes as no surprise that her new neighbor, Sir Lucius, treats her with disdain. Why should he look beyond appearances when her own promises so little?
PHILIPPA HOLDS COURT

At the start of their London Season, Philippa Clavering discovers her friend Susan is being pursued by the wrong gentleman and decides to turn Susan’s head to a worthier suitor. Not one to shrink from what she views as her duty and gift, Philippa sets plans in motion to bring about the happy ending her friend deserves. What she does not expect is to have Susan’s older brother watching—and criticizing—her every move.

THE SPORT OF MATCHMAKING
George Clavering is much too young to think about getting married. Yes, his older brother—and even his younger sister—have managed to tie the knot, but he has plenty more years of play and sporting events ahead of him before he need consider such a thing. Even matchmaking becomes a sport when gentlemen bet on the Season’s successes or failures in the club. He will not give them an opportunity to bet on him. Furthermore, why settle down when there are young women like Lady Alice who liven the sport of matchmaking with friendly wagers?

The Clavering Chronicles series contains three full-length novels. All three are clean & wholesome Regency romance, written in the traditional style.
Posted by Julie Coulter Bellon at 8:54 AM No comments: 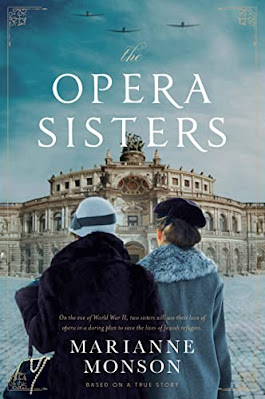 The Opera Sisters by Marianne Monson follows two sisters as they, “use their love of opera in a daring plan” to help Jews escape Germany just before World War II. Because these sisters love the opera, they travel to visit opera houses and are very involved in the music community.
As they see what is going on in Germany, it becomes clear to the sisters that Jewish people need to escape Germany. Using Ida’s money that she is earning as a writer and with some help from their friends, Ida and Louise are able to help 29 Jews escape Germany just as danger begins to set in.
Although the story of these two sisters is fascinating, the book is a bit hard to follow. You can tell the author loves WWII and really did her research, but sometimes she breaks away from the story of Ida and Louise to focus on other parts of the war. Because the book is not broken into chapters and instead uses paragraphs under headings, I found it difficult to keep the characters straight and hard to read at times. Overall, however, it is a great idea for a book and these sisters deserve to have their heroic story told.
Get your copy HERE
Here is the back copy:
Based on the true story of the Cook sisters, who smuggled valuables out of 1930s Nazi Germany to finance a daring, secret operation to help Jews find hope for a new life in England.

British sisters Ida and Louise Cook enjoy their quiet, unassuming lives in south London. Ida writes romance novels, and Louise works as a secretary. In the evenings, the sisters indulge in their shared love for opera, saving their money to buy records and attend performances throughout England and Europe, becoming well-known by both performers and fellow opera lovers.

But when Hitler seizes power in 1933, he begins targeting and persecuting German Jews, passing laws that restrict their rights and their lives. The sisters continue their trips to the German opera houses, but soon, Jewish members of the opera community covertly approach the sisters, worried that they will be stripped of their wealth and forced to leave their homes and the country. Danger looms on the horizon, threatening to spill across all of Europe’s borders.

Ida and Louise vow to help, but how can two ordinary working-class women with limited means make a difference?

Together with their beloved opera community, the sisters devise a plan to personally escort Jewish refugees from Germany to England. The success of the plan hinges on Ida and Louise’s ability to smuggle contraband jewelry and furs beneath the watchful eyes of the SS soldiers guarding various checkpoints. But how many trips can they make before someone blows a whistle? Or before the final curtain falls on Germany’s borders?

The Opera Sisters is a riveting and inspiring novel of two unlikely heroines whose courage and compassion gave hope to many Jews desperate to escape Nazi persecution. 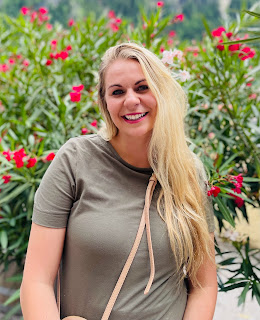 Lauren is from Utah and has been an avid reader her whole life. She graduated from BYU in History and currently teaches elementary school and works at a rare bookstore. She is also a docent at the Church History Museum. Her passions include traveling, spending time with family, learning about history, and of course, reading.

Posted by Julie Coulter Bellon at 8:30 AM No comments: 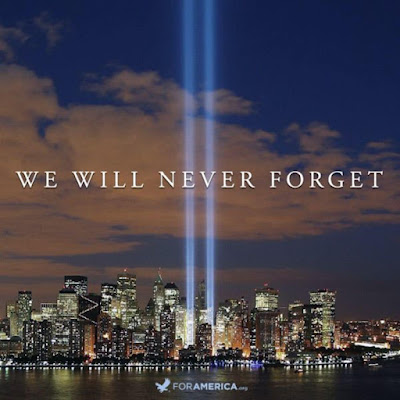 I know I'll never forget.
We watched a documentary about Sept. 11 today and all those feelings of shock and helplessness came back. It's hard to believe it's been over twenty years, but I can still remember where I was and the events of that day clearly.
Do you remember where you were?
Posted by Julie Coulter Bellon at 2:00 PM No comments:

The Passing of Queen Elizabeth 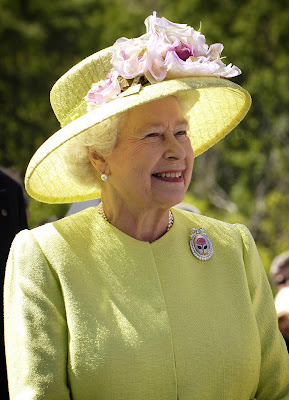 I was so saddened to hear of the passing of Queen Elizabeth. It sounds like it happened very quickly since her family was trying to gather as fast as they could. I'm so glad she was able to pass at one of her favorite places on earth. She leaves behind such a legacy of loyalty and love for her country. She served so faithfully in her role. My grandmother, father, and aunt were privileged to have lunch with the Queen and mentioned how very gracious she was. I think the world will miss her steady presence.
Rest in peace.
Posted by Julie Coulter Bellon at 10:00 AM No comments:

Something to Make You Smile 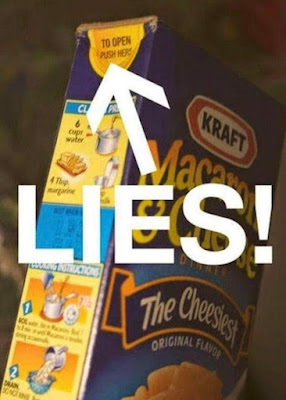 This made me laugh SO hard today, I just had to share!
Posted by Julie Coulter Bellon at 10:00 AM No comments: 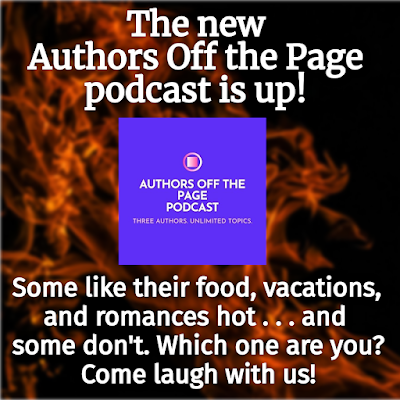 Have you listened to the new Authors Off the Page podcast yet? We had a lot of fun discussing what things we like hot (weather and cookies included) and laughed together over some "hot" romance. I hope you tuned in and got to laugh with us!

You can listen HERE
Posted by Julie Coulter Bellon at 8:30 AM No comments:

I hope you had the best day! I spent it with my family. Do you have any Labor Day traditions?

Posted by Julie Coulter Bellon at 8:00 AM No comments: