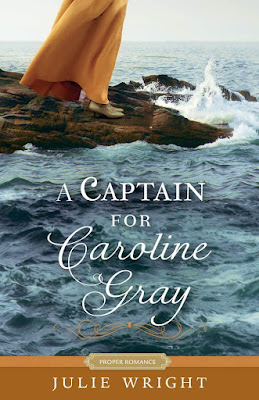 I was really looking forward to Julie Wright's new book, A Captain for Caroline Gray. It's the newest in the Proper Romance line and definitely one worth reading!
Caroline Gray has had three seasons and none of them yielded any marriage prospects. When her mother's friend offers to pay for Caroline to travel to India and marry her son, Caroline accepts because there aren't a lot of other choices for a woman in this time period. On the ship to Mumbai, she meets several other young ladies also traveling to find marriageable prospects, and Captain Thomas Scott. The captain tries to stay aloof, but Caroline's knowledge, conversation, and spirit intrigue him. They form a friendship that could possibly turn into more---if Caroline wasn't supposed to be marrying a man when the ship docks in India. Can Caroline and the captain risk it all for love?
I love this tender, slow-burn romance that also has a twist of suspense to it. Caroline is a relatable girl, who has such a vibrant personality. She finds herself making decisions that have unforeseeable consequences, then she has to do her best to deal with what comes her way. I like how kind she was to those on the ship and the friendships she made with the other girls. Thomas was a good hero, with his own thoughts and preconceptions that lead to misunderstandings. He does have a soft heart, though, and I liked seeing glimpses of that in his interactions with Caroline. The villains of the story were well-balanced and not overdone and I really liked the twist at the end. The author does really well with the setting, especially the scenes on the ship. There was just enough detail to help the reader feel like they were there without being overdone. The secondary cast is memorable and brings a nice depth to the story. Ms. Wright has a subtle, nuanced style to her romances and I enjoy that. Fans of the Proper Romance line will not be disappointed when they dive into A Captain for Caroline Gray.
Get your copy here
Here's the back copy:

Caroline Gray would rather be daring and intelligent than demure and insipid, which is why she is still unmatched after her third season in London. Her family’s threadbare finances leave Caroline with only one choice to secure her future: sail with the Fishing Fleet to India, where the son of a family friend is willing to consider an engagement to her.

Captain Thomas Scott loves the open sea as much as he despises the three-month, twice-yearly trip his ship makes as he ferries young English girls across the ocean. He can’t imagine what family would allow an innocent young woman to be matched up with the Englishmen of questionable reputation who work and live in India.

But when Miss Gray boards the HMS Persistence, all of Captain Scott’s plans are upended. Miss Gray’s fiery spirit can’t be contained, and he is shocked and secretly delighted at her boldness—and her beauty. But the rest of his passengers aren’t so kind.

Caroline finds herself an outcast among her peers, but Captain Scott becomes an unlikely ally. They share the same passions and interests, creating an undeniable attraction. But they both know any relationship between them is impossible. After all, Caroline has obligations to fulfill in India.

Caroline has until the end of the voyage to decide if she is going to marry a man she has never met or be brave enough to love a sea captain who just might break her heart.
Posted by Julie Coulter Bellon at 8:30 AM