Book Review: The Crown of Rosemund 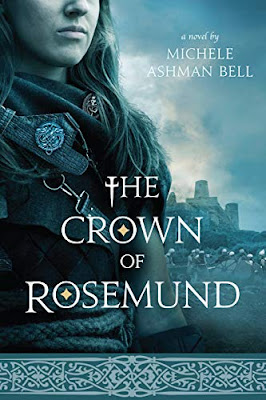 Michele Ashman Bell has a new YA adventure romance out called The Crown of Rosemund, and it is so good! (And don't you love the cover?)
Princess Rosemund has an idyllic life with her parents---until they are murdered. A kind servant hides her away in the forest until such time she can go back and reclaim the throne that is rightfully hers. Rosemund spends the time wisely, training and learning who and how to trust. But when the country is nearly falling to ruin under the selfish new ruler, Rosemund must return earlier than expected. But danger lurks around every corner and the window she has to put their plan in motion is quickly closing. She has one chance---and if she fails, she will die.
This is such a fun adventure story with a little bit of romance. Rosemund is a relatable character who is thrown into extreme circumstances and muddles her way through trying to adapt. She has good people around her that help strengthen her for the hard road ahead---including Maxwell, a warrior who has captured her heart. But it is his love and support that sustains her and helps her as she works to get her kingdom back. The romance is definitely in the background, however, as the political intrigue is front and center. There are specific trials that have to be overcome before Rosemund can claim her throne and the danger level is ratcheted up with nearly every chapter. Halfway through the book you won't want to put it down, just so you can see what happens to Rosemund as she claims her birthright. A really fun read!
Get your copy here
Here's the back copy:
Anduron, 1498

The king and queen are dead, murdered by one who will stop at nothing to rule. But the young princess—Rosemund—has survived, spirited deep into the forest by her parents’ most trusted advisor. There, she finds refuge in a small cottage and a new life, one in which she must play a role that will ensure her survival. Soldiers are combing the countryside, searching for the lost princess, and they will not rest until she is found—and executed.

Rosemund’s strength grows as she trains for battle and endures the hardships and dangers of peasant life. When chance brings Maxwell, a young man from the nearby village, into her life, Rose finds in him an ally and a friend. As her sixteenth birthday approaches, the time has come for Rose to reclaim her birthright, and in a court controlled by a vengeful new ruler, she must play a deadly game of politics in order to seize the throne that is rightfully hers.
Posted by Julie Coulter Bellon at 9:23 AM

Wow! What an awesome review! I appreciate your insight to the story and how you captured the real essence is Rosemund’s situation.

Wow! What an awesome review! I appreciate your insight to the story and how you captured the real essence is Rosemund’s situation.