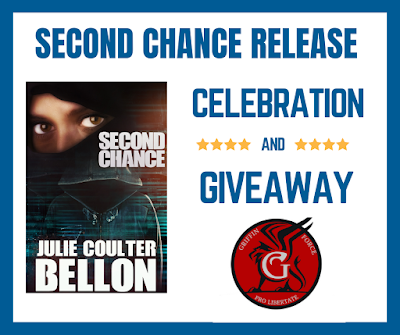 I can't tell you how excited I am that Second Chance is out! AND the early reviews have been wonderful, so I thought it would be fun to have a little party and a giveaway! You could win a $30 Amazon gift card or an autographed paperback of Second Chance. Let's celebrate!
Don't forget to scroll down and enter!
You can get your copy of Second Chance here
Here's the back copy:
A mission to capture the world's most wanted terrorist. A computer tech sent in undercover. And a woman with a secret that could change everything.

Griffin Force tracks the world's most wanted terrorist to Libya, but the only one on their team that can infiltrate his lair is Augie---their computer tech. Their Libyan contact sends in a young man to help protect Augie during the assignment, but he’s hiding something and Augie doesn’t trust him.

When the simple observe-and-report mission turns into a much bigger operation, Augie must figure out how to alert Griffin Force to Atwah’s deadly plans without compromising his cover. But things get complicated when Augie discovers the secret of the young man with him. Now he’ll have to find a way to stop Atwah and keep both of them alive---or he’ll die trying.
a Rafflecopter giveaway
Posted by Julie Coulter Bellon at 8:48 AM

Kind of dying to know about the mystery woman!

I would love to visit France.

Stitcher, I would love to see Ireland, too!

Mechams, I LOVED France. The food was to die for. Such a beautiful place!

I would want to visit England and all those places I've read about.

I would visit Germany because most of my ancestors lived there.

Mara and Jeanna, I would love to go back to England and Germany! There are so many things to see. Great choices!

I would love to visit London. Thank you

Getting Your Read On said...

Right now I would be willing to go just about anywhere. I would love the chance to do the trip I missed last year due to Covid. That was Prague, Slovakia, Vienna, and Paris.

I would love to go to Ireland with my family. Our trip there got canceled due to covid.

Europe. I want to see it all!

So many trips were cancelled due to Covid! I hope we all get to see what was once planned. And I wish I could go to all these places with you! Thank you to all my fellow travelers who commented!