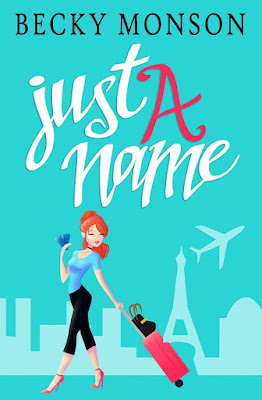 With all this cold weather, you might need a romantic comedy to warm you up---and Becky Monson's book, Just A Name, is free today! All you need is a snuggly blanket, maybe a bit of chocolate, and you are set!

Holly has a plan for everything. But she never could have planned for this.

Holly Murphy’s perfectly planned life is not going so well. Her fiancé recently dumped her, the team she supervises at work secretly hates her, and now the promotion she’s worked so hard for is in jeopardy.

Thinking that maybe Holly is too tightly wound and needs a break from everything, Holly’s boss demands she take a vacation. Holly’s best friend Quinn comes up with a wild idea for Holly to do a nationwide search for a man with the same name as her ex-fiancé to go with her on her honeymoon trip. That idea is a no-go for play-it-safe Holly, until her boss finds out and loves the idea.

Resigned, Holly gives in and starts the nationwide search, and when handsome Nate Jones from Newport Beach gets picked to go with her, she wonders if this whole thing won’t be so bad after all.

Will Holly learn that sometimes even the best laid plans need to be thrown out the window once in a while? Or will it send her running and screaming back to her safety net?

Posted by Julie Coulter Bellon at 8:00 AM