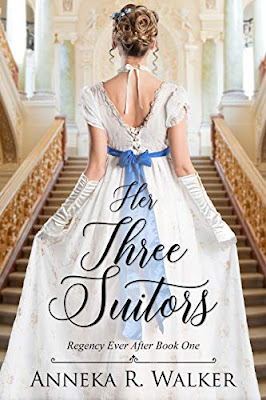 If you are looking for a book to read this weekend, Anneka Walker's regency romance fairytale retelling, Her Three Suitors, is free today! I haven't read this one, but it looks cute!
Get your free copy here
Here's the back copy:
Sophia has three suitors vying for her hand, but the scandal behind her birth could ruin her reputation and her chance at love.

Sophia never expected to grow out of her awkwardness and be nicknamed society’s darling Golden-locks during her first London Season. Now, three of the most eligible men of the ton are invited to her house party in hopes of securing a most advantageous match. Shortly before they arrive, Sophia stumbles upon her birth record and an alarming discrepancy. She is determined to discover the identity of her real mother at all costs. Can she choose someone to marry before her secret is out, and her reputation is ruined forever?

Terrance is a second son of an Earl with no great inheritance and no abundance of charm. When pitted against his brother and his best friend as a suitor for Sophia’s hand, Terrance isn’t even going to pretend to be a contestant. Again and again, fate throws Terrance into Sophia’s path until Terrance realizes two things: Sophia is hiding something and, despite his stubborn nature, he is most definitely in love with her. If he chooses to fight for her, he’ll risk losing the brotherhood he’s relied on all his life.
Posted by Julie Coulter Bellon at 9:23 AM