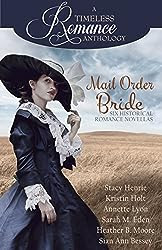 I am really excited to be part of the blog tour for the Timeless Romance Anthology Mail Order Bride Collection. It has several of my favorite authors and a few new ones and none of them disappointed!

The first one, Written In Her Heart by Stacy Henrie was a sedate romance of a woman who decides to put out a notice to be a mail order bride, but the man she works with and has loved for years finally seems to be coming to grips with his true feelings for her. Or is he? A charming story.

The second one, Wanted: Midwife Bride was probably my favorite. I haven't read anything else by Kristin Holt, but I will need to start! Dr. Naomi Thornton has been doing her best to survive in a man's world of medicine, but when she is betrayed she flees west to answer an advertisment for a mail order bride. Dr. Chandler just needs a helpmate, but when Naomi walks into his office while he's digging a bullet out of someone and doesn't even flinch, he knows he's found much more. Their love story was riveting for me and I was turning pages when I should have been making dinner just to see how her secret would come out! I really enjoyed this one.

The third one, The Sound of Home by Annette Lyon had a similar storyline to the previous novella where the woman is nearly forced through circumstances to flee to the West, but that's where the similarities ended. Marilyn is expecting something very different when she gets off the train. The man who sent for her isn't actually capable of marrying since he had an accident years ago and his mental capacity is quite diminished. His brother that takes care of him tries to take care of the Marilyn situation, but their feelings for each other surprise them both.  A nice story of healing and family and what it means to truly love and serve others.

The fourth one, For Better or Worse, by Sarah Eden has her trademark humor in it.  Gerald sends away for a mail order bride only to get a woman that he is already very familiar with---and doesn't like. How could he ever make a marriage work with Mary, the teenager he dubbed The Plague because she was such a ginormous pest? But all is not as it seems, and the more Gerald puts his prejudice aside and really tries to get to know her, the more she is able to trust him with her secrets. Poignant and sweet, this one will stay with you for a while.

The fifth one, The Inconvenient Bride, by Heather Moore starts out when Carmela finds her brother about to marry a woman that she knows she could never live with. Desperate to find her own way, she answers an ad to be a mail order bride and heads to Colorado.  Unfortunately, her intended groom dies before she can get there and the next train doesn't arrive for a while. Her intended's brother steps up to help her and is such a sigh-worthy hero. Their feelings begin to grow into something more, but can they make a true connection before the train comes to take Carmela away?

The sixth one, The Price of Silver, by Sian Ann Bessey, has Katie heading to Idaho to be Jake's mail-order bride, but the fortune seeking Jake is already gone when she gets there. Caleb, Jake's brother, invites her to stay at the cabin with him and his mother until Jake's return, but the more Caleb realizes how easily Katie fits into his life and with his family, the more he envies his brother. Fighting their feelings, they anxiously await word as to what Jake's plans are. Is there a future for them after all?

Each story had a satisfying ending, so even though they are novellas, I loved that they all had fleshed out characters and a solid storyline that left me with a smile. They are the perfect size for a snack of romance and still feel like you've eaten an entire course!

You can buy your copy here

Be sure to scroll all the way down and enter the giveaway!

WRITTEN IN HER HEART, a charming novella by Stacy Henrie, Georgeanna is getting desperate. She can’t fund her favorite orphanage unless she marries and secures the rest of her inheritance left by her father. But her father’s financial planner, Clay, can't understand why she's not content with her current situation. Georgie determines to send out a notice as a mail order bride to attract suitors who won’t know her financial situation. Little does she know, Clay takes up the pen and sends her letters of his own under an assumed name. After years of working for Georgie’s father, Clay realizes he isn’t ready to watch her marry another, not when his heart is already claimed by her.

In Kristin Holt’s delightful novella WANTED: MIDWIFE BRIDE Dr. Naomi Thornton thinks she has it all: a beautiful house, a loving husband, and a fulfilling career. But when everything she holds dear is ripped away, Naomi has no choice but to start over. What will she find in the wild and untamed Wyoming Territory? Dr. Joe Chandler has waited years for a wife with the knowledge, skills, and tender heart he yearns for in a medical colleague and lifetime companion. When a midwife arrives with more expertise and secrets than he counted on, Joe quickly discovers there’s more to love and marriage than a simple mail order contract.

In THE SOUND OF HOME, a captivating novella by Annette Lyon, Marilyn is given the choice of either marrying the despicable Victor or being charged with a murder she didn’t commit. Refusing to believe that either is her fate, she finds a third option: she answers a mail order bride advertisement and boards a train to Wyoming to wed a man named Harry. Moments after her arrival, she learns that Harry isn’t who he seemed to be, and the advertisement turns out to be a giant mistake. Harry’s brother Thomas agrees to let her stay until she can figure out what to do next—after all, she simply cannot return to New York—but Marilyn quickly finds herself developing feelings for Thomas.

In Sarah M. Eden’s endearing novella FOR BETTER OR WORSE Gerald Smith, on the advice of his well-meaning neighbors, has decided it’s time to change his lonely existence. Mary Hill, on the advice of her empty pocketbook and non-existent roof over her head, has decided it’s time to secure herself a future. A mail-order marriage, they both realize, is no guarantee of happiness, but it is a risk they are willing to take. However, coming face to face on the train platform, the hapless couple discovers an unexpected truth: marriage to a perfect stranger is sometimes far preferable to the prospect of a lifetime with someone you used to know.

Heather B. Moore’s sweet novella THE INCONVENIENT BRIDE sees Carmela traveling from Boston to Colorado, eager to meet the man she’s been corresponding with and will soon marry. Her brother’s new marriage leaves little room for Carmela in her old life. Upon arrival in Leadville, she faces a rude awakening, and the only one who can understand her predicament is her fiance’s brother, Samuel. But Samuel can’t possibly help her out of an awkward situation, can he? It would be better for all if she returns immediately to Boston and pretends she never traveled to Colorado in the first place.

THE PRICE OF SILVER, an engaging novella by Siân Ann Bessey, Katie leaves New York for Idaho to marry Jake, a man she’s written to a couple of times. But when she steps off the train, his brother Caleb is there to greet her. Jake has gone to take a mining job he couldn’t pass up. Caleb takes Katie back to the family ranch to wait for Jake’s return. The more Caleb gets to know Katie, the more he envies his brother, but he can’t let his heart overrule his head unless Jake changes his mind about his intended bride.

Here's the schedule for the rest of the blog tour. Check them out!

March 4: Singing Librarian Books / Why Not? Because I Said So / Wishful Endings

a Rafflecopter giveaway
Posted by Julie Coulter Bellon at 8:42 AM