I'm really excited to be part of the blog tour for A.L. Sowards new book, The Spider and the Sparrow! 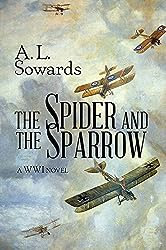 This is a spy novel set during World War I and told from the perspective of three regular people. Julian Olivier is a Frenchman who loves his country, but is war-weary. He's survived horrific conditions in the trenches and just as he's being sent back to the front after a serious injury, he gets recruited to be a spy. He takes the chance because he doesn't know if he can bear the trenches again, and, while being a spy is a different kind of dangerous service, it's still being loyal to the war effort. I loved Julian. He was everything you want in a hero.

The second main character was Evette who escapes a violent home situation and heads to Paris where she finds a job. But there's something sneaky about her foreman and she gets caught up in some intrigue that gets her mixed up with British Intelligence. I loved how Evette is just a normal woman drawn into events beyond her control, but rises to the occasion. And when her story intertwines with Julian's, well, it will keep you turning pages.

The third main character is Warren, an awesome Canadian fighter pilot. He's confident and a war hero who is trying to sort out his feelings for Claire, the daughter of an American munitions manufacturer. But all is not as it seems and Warren is put in a position where he might have to sacrifice everything he loves. His story was so emotional!

There were a lot of things to love about this book. First of all, one of the main characters was Canadian, so that's a major thing to love right there.  Second, the author expertly weaves the historical events into it so it reads like you're really there and not like a dusty history book. But, even though there were a lot of horrible things these characters went through during the war, the descriptions never cross the line into gory or too violent. I could experience it as a reader and not have nightmares if you know what I mean. I loved all the emotion, the depth of the characters, and the realistic setting. One for my historical keeper shelf!

Be sure to scroll down and enter the giveaway!

You can buy your Kindle copy here

May 1915. After tragedy strikes during the Second Battle of Artois, Frenchman Julian Olivier will do anything to get out of the trenches. So when British Intelligence recruits him to spy behind enemy lines, he jumps at the opportunity. Just before he begins, however, he has a chance encounter with a young French woman who leaves his heart marked for the remainder of the war—even if he doesn’t know her name.

Warren Flynn is a Canadian airborne hero, and dogfights with the Germans are all in a day’s work. Second only to his love of flying is his fascination with Claire Donovan, the daughter of an American munitions manufacturer living in Paris. Warren flies Julian into Germany and soon receives orders to post the Allies’ newest operative—an attractive peasant woman named Evette—in Claire’s home.

As a dangerous ring of spies and saboteurs threatens to turn the war against the Allies, Julian discovers goodness in his enemies’ hearts. But even if he survives, will he ever be reunited with the woman whose memory he can’t erase? Will Warren survive the war, and will Evette unearth the infiltrator in her own territory before it’s too late?

a Rafflecopter giveaway
Posted by Julie Coulter Bellon at 1:49 PM