Since Writer Goal Wednesdays are going to be pretty much the same thing for the next few months (writing new chapters for my current project) I thought I'd mix things up a bit and start What I'm Reading Wednesday. 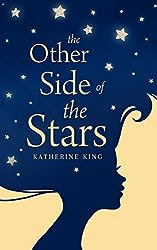 I started a book last night called The Other Side of the Stars, by Katherine King. I stayed up way too late to read.  I don't usually start books late at night, but this one sounded like a book I could only read one chapter of and put it down for sleep. I was so wrong. It hooked me! And then, as soon as all the kids were at school this morning, I came back to it. It is so compelling, I can hardly put it down. It's set just after World War II and is about a girl named Gita who has memories that she can't reconcile, but she wants/needs answers before she can truly move forward. She knows her parents left Germany during the war in a hurry and she had to change her name when they got to America. They don't speak to anyone and keep to themselves. But her father has a mysterious lock box and a tin full of money under the floorboard. Yet, the more Gita delves into the secrets of her past, the more questions she has.

Max shows up on her doorstep one day, the man her aunt has told her she should marry and that he would take care of her. Gita has never been in love before, but the more she gets to know Max, the more engaged her heart becomes.  But Max has secrets in his past as well and I'm right at the good part where the secrets are being revealed.  But it's time to take my little boy to storytime at the library!  Ahhhhh! Can I really put it down right at the good part? Would anyone think less of me if I was reading my own book at storytime?

Anyway, so far this book has been amazing. Well-written, emotional, and engaging. I am loving it!

After the death of her parents, immigrant Gita finds herself in post WWII America with nothing but a few haunting childhood memories and an arranged marriage to Max. Despite her initial hesitations and his elusive nature, the awkward tension soon dissipates as they settle into life together.


But with the arrival of a stranger, Gita realizes she may know very little about the man she married. As her world seems to unravel and the missing pieces of her childhood fall into place, the lives of a Nazi, a young girl, and a prisoner at Auschwitz intertwine, revealing the beauty of what can happen when fate, hope, and resiliency collide.

You can buy your Kindle copy here