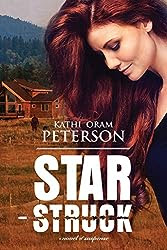 I am so glad to be part of the blog tour for Star Struck by Kathi Oram Peterson.

Movie star Mercedes Grant is getting ready to take on the role of a lifetime when a death threat forces her to lie low while it's investigated. She retreats to a cabin in Idaho, and, when she is horribly ill with a cold, goes to visit the local small town doctor. Dr. Luke Parker is a down to earth guy, trying to raise a teenage daughter on his own. His wife died of cancer ten years before and he hasn't opened his heart since her death. Until he meets Mercedes.  But when he has to give Mercedes devastating health news, he doesn't know if he could handle losing someone close to him again. The problem is, the disease may not have the chance to take her life when the stalker gets closer and closer to his prey.

This book was an edge of your seat suspense with a side of women's fiction. Mercedes has so much on her plate with her health, the stalker, and Luke. I like that she was sometimes overwhelmed and the author allowed to to react in realistic ways to what life was throwing at her. I loved Luke as a hero and how his past had shaped him, but that he did put his heart and his life on the line when it counted. The stalker's identity was a surprise and just when I thought I knew who it was, there was another twist! When you finally figure it out, you'll shake your head.

Mercedes Grant is known to the world as Stormy Ryan, action hero. Her movie-star status has led to some unpleasant interactions in the past, and even a few stalkers, but none has ever come close enough to her to seem dangerous—until now. When she receives a death threat on her personal cell phone, she is understandably shaken. Seizing the opportunity to take some time away from the limelight while the police investigate the phone call, Mercedes escapes to her remote cabin near Idaho’s Snake River. She knows it is the perfect place to lie low, but she doesn’t realize how low she’ll actually feel once she arrives. After days of suffering from a cold she just can’t shake, Mercedes visits the town physician, Luke Parker. The handsome doctor, a fan of the stunning celebrity, performs the necessary tests and is devastated at the unexpected diagnosis he must give her. Mercedes is sick—really sick. He knows she can handle crazy fans, but the news he has to give is another story. As Mercedes struggles to come to terms with her new future, she relies on Luke’s support. But neither imagines the disease is not the only danger Mercedes is facing—because just out of view, someone is watching her and is determined to make good on their threat.
You can buy your Kindle copy here

And don't forget to enter the giveaway!

a Rafflecopter giveaway
Posted by Julie Coulter Bellon at 10:55 PM