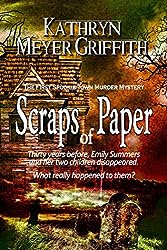 Today's Friday Freebie is a mystery called Scraps of Paper by Kathryn Meyer Griffith. It sounds like one I'll want to read with the light on!

Abigail Sutton's beloved husband walks out one night, doesn't return, and two years later is found dead, a victim of an earlier crime. It's made her sympathetic to the missing and their families.
Starting her new life, Abigail moves to a small town and buys a fixer-upper house left empty when old Edna Summers died. Once it was also home to Edna's younger sister, Emily, and her two children, Jenny and Christopher, who, people believe, drove away one night, thirty years ago, and just never came back.


But in renovating the house Abigail finds scraps of paper hidden behind baseboards and tucked beneath the porch that hint the three could have been victims of foul play. Then she finds their graves hidden in the woods behind the house and with the help of the eccentric townspeople and ex-homicide detective, Frank Lester, she discovers the three were murdered. Then she and Frank try to uncover who killed them and why...but in the process awaken the ire of the murderer.

Posted by Julie Coulter Bellon at 10:55 AM