Since I'm not really writing right now, I thought I'd tell you about the book I just finished reading. 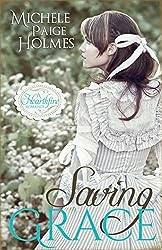 This new historical romance by Michele Holmes caught my eye right away.  Our heroine, Grace Thatcher, is on a husband-finding tour to satisfy her gambler father's wishes that she marry well, but she's doing everything she can to make sure no gentleman will offer for her.  For example, she puts on breeches and rides on a fox hunt and gets thrown from a horse and pays a doctor to say she can't bear children.  Her master plan is to buy some time until her inheritance from her deceased grandfather, a duke, comes through, and she can take her brother and sister far away from their father and live quietly in a cottage by themselves.

Grace's plans go awry when she's in a carriage accident on a dark and stormy night and becomes desperately ill.  She finds refuge in the house of Lord Sutherland, but because of a big misunderstanding, he thinks she's trying to trap him into marriage.  Grace becomes embroiled in a love triangle that had me turning pages to see how it all turned out. (Those are the best kind of love triangles, when it could go either way!)  I loved Lord Sutherland's transformation, the reveal of the family secrets and her relationship with Samuel, but most of all I loved Grace.  She was a wonderful heroine who rose above her circumstances and did the best she could to help those around her, even when it probably wasn't the best idea.

I'm anxiously looking forward to more of the Hearthfire romances from this author.  Well worth the read!

After the death of her grandfather, the Duke of Salisbury, Grace Thatcher wants nothing more than to live quietly in the country with her younger siblings. Her father’s debts thwart those plans, and to protect her sister, Helen, Grace must marry a man of her father’s choosing.

As each suitor proves less than desirable, Grace comes up with clever schemes, causing each to reject her. While staying at the mysterious Sutherland Hall, a middle-of-the-night mishap sends Grace into the arms of a stranger, Nicholas Sutherland—and provides inspiration for her grandest plan yet—one that will leave her reputation in tatters yet free both her and Helen from all possibility of marriage.

Too late Grace regrets her rash actions when her father’s last choice, Mr. Samuel Preston, proves to be a gentleman and a friend. But Samuel is the sworn enemy of Nicholas Sutherland, the man responsible for her “ruin.” Now instead of being free, Grace is caught between two men—each with his own agenda.

to buy!
Posted by Julie Coulter Bellon at 1:41 PM

Thank you, Julie! I'm so glad you enjoyed Grace's story.

I love Michele's romances. I just bought it. Thanks for the link!