Today's Christmas book review is a beautifully illustrated story called Sam's Christmas Wish.  I think this one has become a new Bellon family favorite.  It shows the true meaning of Christmas and makes me tear up every time I read it! 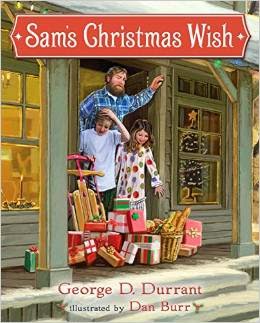 It's the story of Sam who is having a hard time providing a Christmas for his family, but he doesn't want "charity" from his neighbors.  He sits up with a shotgun across his lap to  make sure nothing gets dropped by, but somehow gifts and a Christmas dinner are left anyway.  Sam doesn't let his family touch any of it and instead calls the sheriff.  Surprisingly, the sheriff comes out and talks to Sam, pointing out that there's no footprints in the snow.  How would any of his neighbors hide that? Sam finally accepts the gifts and thinks about the scripture given of doing our alms in secret.  He then turns his life around to start doing his own "alms in secret" and longs for a time when he can pay it forward at Christmas to someone else's family.  That opportunity comes and boy, I didn't expect the ending.  A sweet story that will definitely put some Christmas spirit into your home.

Sam Edwards isn't looking forward to Christmas, at least not this year. Since losing his job six months before, he hasn't had any luck in finding a new one. He isn't sure how he can give his family a merry Christmas, and the last thing he wants is charity from his neighbors. But when he falls asleep in his living room with his shotgun across his lap just to make sure no one attempts to visit him he wakes up to find his front porch laden with Christmas goodies. But when he tries to find out who left the presents, the freshly fallen snow reveals no footprints.

Years later, Sam's wife has passed away and his children are grown. Old and sick, Sam remembers the kindness of the anonymous stranger from long ago and wishes for an opportunity to bless another's life. So on Christmas Eve, when he sees his neighbor's house on fire, he hopes that he can be the means for another anonymous miracle. Sam's Christmas Wish is a story of love, service, and sacrifice.
Posted by Julie Coulter Bellon at 4:51 PM

That does sound sweet. The illustrations are beautiful.