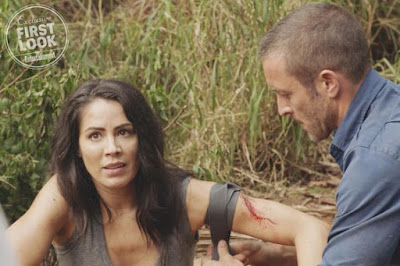 As Hawaii Five-0 comes to a close, I've been thinking a lot about Steve and Catherine and the slow rebuild we've seen between them since their breakup.

1. We don't hear much about her after the breakup until Steve finds out she was working for the CIA and her cover was about to be blown. Then he was totally focused on the mission and making sure she was safe, calling her, "someone very important to me." Then, after it's over and her cover is intact, Danny asks if Steve if he's going to be angry because she lied and Steve says, "If I'm honest with myself, I also understand why she did it. Under similar circumstances, I'd have done the same thing." So, he's starting to understand. He also tells CGI Jack Lord and Harry that he "might have met the right woman and couldn't hold on to her" and that he only had one that he "let in" speaking about Catherine.

2. The next time they see each other, Cath is coming to tell him his mother has been kidnapped and she needs his help to break her out. While on the plane, Cath tells Steve she wanted to tell him and he was the last person she ever wanted to lie to. She thanks him for saving her when her cover was nearly blown. He accepts that and says she would have done the same thing for him. Cath also finds out Steve was going to propose. It's still a little awkward between them, but at the end, he asks out of curiosity what she would have said, and she tells him she would have said yes. He closes the airplane door and lingers on it for a bit. Feelings are obviously still there and maybe thoughts of what if.

3. Then, when terrorists are on the island Cath comes to Steve with the mission, and we get a lot of cute dialogue. Things are easier between them. Steve tells Cath that Tani reminds him of her, "she's an army brat, you're a navy brat, you're both good at your job and you both got good hearts." Awww.

They talk about how they were friends before they were in a relationship, and yes, they talk about how sleeping together wasn't good for their friendship, not that it wasn't awesome. Ha! Steve had mentioned to Joe that he was hesitating in asking Cath out because he didn't want to ruin their friendship. And while their relationship hasn't been smooth sailing, I'm glad they didn't lose that foundation!

They have each other's back through the whole mission. There are so many "looks," between them, but especially in the spike pit when her hands are on his shoulders and he's about to boost her up. *le sigh* Their bond is so obviously still there. They also get a chance to clear up the questions she had surrounding the proposal and if he was really going through with it or just thinking about it. He assures her he was going to propose. It was nice to see some of the past being cleared up so they can move forward. And they are actually in really close proximity to each other for nearly that entire episode and working together like they've been partners for years.

At the end, Lou asks him if it was nice to catch up with Cath and he says, "yeah, it was nice," and Lou gives him a look and he grins and says, "What?" the ease and camaraderie is obviously back between them.

Alex O'Loughlin also had this to say about that episode.

"It was great to see Michelle and it was cool to pick up where we left off. It's a great action, travel-y episode with McGarrett and Catherine," O'Loughlin told ET in March. "It's also nice to see these two sharing the same space for a minute and to explore how they feel about each other, how everything is cool [between them]. It was weird for a minute, the way she left -- somebody who's about to get proposed to and they choose an allegiance to the government and national security. It was a big blow for McGarrett. I think this episode served as a gentle closure and reinstated the friendship between the two of them, which was really important." https://www.etonline.com/hawaii-five-0-sneak-peek-mcgarrett-and-catherine-have-a-spicy-reunion-exclusive-100248

Really important to reinstate the friendship for the rebuild of something more? Hmmm....

4. We see Cath again after Joe dies, when Steve calls her to help bring in those who were responsible for the hit on Joe and the SEAL team. Once again, the ease between Steve and Cath is there. He confides in her about feeling responsible for Joe's death and she tells him she's in this with him until the end and reassures him that Joe's death isn't his fault. He confides in her about Greer and she is there for him. (We also get them playing a married couple for the mission, which was fun.) In the final scene with Greer, we also have Steve unarmed in front of Greer, totally trusting Cath to have his back. In the end, he tells her how Joe was the one who helped bring her into his life and they are both glad Steve took his advice. They hug, and say a lingering goodbye "until next time."

So, looking back, I can see a pattern of them slowly rebuilding their relationship after the breakup from awkward to the friendship to realizing how much they still trust and rely on each other. Obviously, I'm hoping that Cath will be in the series finale and we'll see that "next time." She was his girlfriend in the beginning, the woman he said "I love you," to and the one he wanted to marry. I want him to have his happily-ever-after and I believe she is the woman he could be happy with. (And so did Freddie, Joe, Aunt Deb, Doris, and Danny).

I can hardly wait for the new episode this Friday!
Posted by Julie Coulter Bellon at 12:30 AM

This is a great reflection on their relationship. True to life, where sometimes we let things around us interfere with the thing we want the most. Like you I hope we get to see something with them together in the end!

I agree! I think Joe's words about not waiting to find someone are really hitting home as we saw in the last episode. Of course I want him to go and "find" Cath! Thanks for your comment!

If you like Cath, you only are an evil person like her, how can you trust and want that a CIA agent lie to Steve and fake her death to go after some terrorists, like Doris? Because that's what will always happen with a CIA operative, lies and more lies forever after. It is sad and hard to understand why some women support this kind of behaviour.

I'm sorry you feel that way, Anti Rollins Abuse. I actually hope that Catherine will leave the CIA and her and Steve can build a life together and realize that their love should come before duty. I like them as a couple, they both have sacrificed for their country, but now it's time for them to find happiness. That's just my opinion, though. Thanks for your comment!