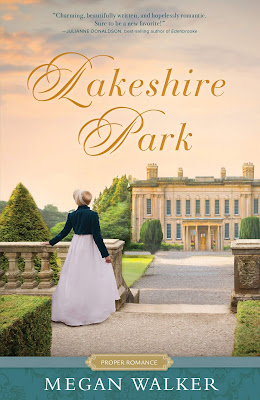 I was so lucky to get an advanced copy of Lakeshire Park, Megan Walker's addition to the Proper Romance line. I loved it!

Amelia Moore is in a bad situation. Her mother has passed away, leaving them in the care of their stepfather who wants to wash his hands of both Amelia and her sister. She has one last chance to save them both by encouraging an attachment between Clara and Sir Ronald. Luckily, Sir Ronald invites them to a house party which is the perfect opportunity to cement the match. Unfortunately, the arrogant Mr. Peter Wood also wants a match between Sir Ronald and his sister. It becomes a sort of competition and Peter and Amelia are thrown into some circumstances that are fun and funny!

I thought the author did an amazing job with the wit between the characters and still held true to the society rules and expected decorum of the regency period. I loved the chemistry between Amelia and Peter and the building attraction between them. There is a good character arc as Amelia realizes that her judgments may not always be correct and Peter also sees things in a different way the longer he knows Amelia. I really enjoyed the ending and all the twists and turns Amelia had on her journey to love, as well as her sister Clara. The secondary cast was well-rounded and there were several characters that I hope to see in future books. Ms. Walker is definitely an author I would love to read again! Don't miss this one!


Amelia Moore wants only one thing--to secure the future happiness of her younger sister, Clara. With their stepfather's looming death, the two sisters will soon be on their own--without family, a home, or a penny to their names. When an invitation arrives to join a house party at Lakeshire Park, Amelia grasps at the chance. If she can encourage a match between Clara and their host, Sir Ronald, then at least her sister will be taken care of.

Little does she know that another guest, the arrogant and overconfident Mr. Peter Wood, is after the same goal for his own sister. Amelia and Peter begin a rivalry that Amelia has no choice but to win. But competing against Peter--and eventually playing by his rules--makes Amelia vulnerable to losing the only thing she has left to claim: her heart.
Posted by Julie Coulter Bellon at 10:06 PM