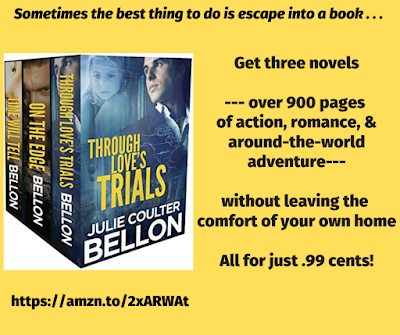 I know some of us are worried with the world events that are happening, and I wanted to do something for all of you.

For me, when I am worried, sometimes the best thing I can do is escape into a book. So today I am offering my Canadian Spies boxed set of three action adventure romance stories for only .99 cents and sending it along with a gentle hug from me.

Get your boxed set here

From the ruins of Greece to exotic Turkey, these three action adventure romances will keep you on the edge of your seat with daring operatives that find their chance for love in unexpected places.

Through Love's Trials (Book One)

Attorney Kenneth King can't wait to get away on vacation and leave the courtroom behind. He only has one last errand to do for his boss―drop off a flash drive to fellow attorney Emma James. But as soon as the drive is in his hands, his boss is murdered and Kenneth becomes the next target. With nowhere left to turn, he reaches out to Emma for help―but that only puts them both in danger.

Emma James just wants to settle into her new job and provide a good life for her little girl. That is all threatened when she gets a flash drive with information on it that points to an imminent terrorist attack on U.S. soil. With her choices dwindling and her vulnerabilities made crystal clear, Emma is pushed to the limit by those who want her dead and the rest of the country to suffer. How far will she be forced to go to save the lives of everyone around her, including those she loves?

Kenneth and Emma have to find a way to work together to stop the terrorists, but it's the most difficult trial of their lives―and the verdict will be life or death.

On the Edge (Book Two)

Dylan Campbell, a CSIS officer, has been undercover hundreds of times before and is ready to get out of the game. But before he can tell his bosses at the Canadian spy agency, he discovers a terrorist plot that could take him―and millions of others―out permanently. Getting the information up the chain of command proves complicated, though, when Dylan's cover is blown and he's captured and thrown in an African prison. Will he be the first test subject for the new and deadly virus about to be unleashed on the world?

American CIA officer Elizabeth Spencer is undercover for one reason―to find the virus being weaponized at a private hospital in Africa. When she meets Dylan, a Canadian photojournalist, she uses him to strengthen her story that she's only there to help. But the more she works with Dylan, the more the lines between professional and personal get blurred. She knows better than to get involved with someone while on assignment and the reason for that rule hits home when the terrorists’ move up their timetable and Dylan is put in grave danger. Can she stand by and watch him die?

With everything on the line, Dylan and Elizabeth have one chance to stop the terrorist attack before it reaches North America―but they have to make it to Greece. Can they break Dylan out of prison and stay alive long enough to prevent the release of the virus? Or will one or the other be called upon to offer the ultimate sacrifice?

Undercover operative Jason Wright and his partner Kamal were left for dead in Iran---casualties of a war on terror. But Jason survived and he's out for revenge. He's selling his country's secrets to the highest bidder and he doesn't care who gets it---as long as he gets paid and Kamal's death is avenged.

Andrew Blythe, a Canadian CSIS agent, races against time to stop the information exchange, knowing that a dangerous terrorist organization will use it to gain control of the Baku oil leases in the Caspian Sea. With those leases, they will be able to finance a weapon of mass destruction---and kill thousands of innocent people.

But things don't go as planned and Andrew finds himself wounded and on the run, unsure of who to trust. Desperate, he takes Ashton Carlson's car, and pulls her into the web of espionage that is tightening like a noose around him. Forced to keep her with him for safety's sake, Andrew isn't prepared for the feelings she stirs in him. But with danger around every turn, Andrew knows time is running out for both of them. Can he stop the terrorists' plans and keep Ashton from being killed? Or will he have to make the ultimate sacrifice to save them all?
Posted by Julie Coulter Bellon at 10:44 AM