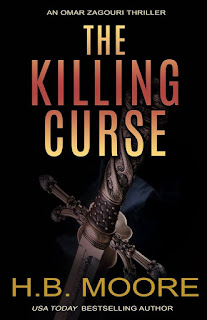 If you are looking for a thriller to read this weekend, The Killing Curse, is free today! I have really enjoyed all the Omar Zagouri thrillers, (I hope there will be more in the series!) so I thought I'd pass this one along! (If you are a sensitive reader, just be aware that The Killing Curse is based on the illegal tradition of honor killings.)

Betrayed by her father. Kidnapped by her brother. Only one chance to survive.

Omar Zagouri should have known that the hunt for an ordinary art thief in London would end up being far from ordinary. Abducted and carted across several countries until he’s locked up in the middle of Jordan’s desert, Omar becomes the target of an underground crime organization that dates back to the Crusaders era. As Omar works to uncover the deadly secrets that connect centuries of deceit, he finds himself trying to prevent a scheduled honor killing from turning into another tragedy, while exposing the ancient crime organization for generations of lethal corruption.