Book Review of Secrets and Suitors AND a Giveaway!

I've enjoyed Joanna Barker's books before and I was excited to see that she had a friends-to-something-more romance coming out. I was not disappointed with Secrets and Suitors! It was the perfect, swoony, historical romance read.

Nora is entering her third season and her parents are pressuring her to marry. She has some prospects, but none of them measure up to the man she's always loved---her childhood friend, James. But James is in Jamaica and doesn't return her feelings anyway. Nora is trying to move on with her season and bow to her parents wishes, when James suddenly appears. All her old feelings come rushing back and maybe, just maybe, he might return them. But secrets come to the surface and Nora is forced to make a choice that could ruin any chance she would have with James. Do you see why it's an un-put-down-able book? Who wouldn't be turning pages as fast as possible to see what happens?

I loved the characters in this book. Nora is so adorably introverted, but trying valiantly to participate in the season. She loves her sister and brother and James truly understands the person she is inside. But outside forces seem to be combined against them, and Ms. Barker draws out all the feelings on this twisty-turny journey to love. I loved the setting, the secondary cast of characters, and even the villain was well-drawn. But my favorite character was James. He's such a sigh-worthy hero and readers will definitely be rooting for James and Nora to get their happily-ever-after! Definitely one for the keeper shelf.

Don't forget to scroll down and read the author interview with Joanna Barker AND enter the giveaway!


You can get your copy here 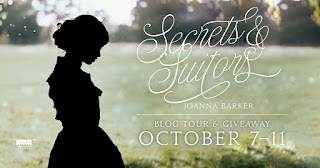 
Reluctantly returning to London for yet another Season, shy Nora Hamilton has nearly given up hope that she will ever find the love match she longs for. After all, the one man she does harbor feelings for—her closest friend, James—has made it perfectly clear he views her as just that: a friend. With James traveling half a world away and Nora's father pressuring her to marry for wealth and status, Nora is forced to set aside her desire for love and accept the future she has always dreaded.

Until James returns unexpectedly and Nora's feelings once again rush unbearably close to the surface. Determined to save what is left of their friendship, Nora ignores her own heart and allows herself to be swept up in the London Season, soon finding herself the object of two very different gentlemen's affections. Though she should be thrilled, both men come with a glaring fault: neither is the one man who holds her heart.

But there is much more at stake than heartbreak. When long-kept secrets are laid bare, Nora must face the fears that have plagued her all her life and decide what true love is worth.


1. Will you use any of the characters in Secrets & Suitors for another book?

2. What do you hope readers will gain from this novel?


I hope readers will be able to relate to Nora’s struggles. Of all my heroines, she is probably the one I relate to the most, and I loved being able to create a story where she learned and grew from her experiences. A lot of Regency romances feature fiery, sharp, independent heroines (which I LOVE), but I wanted to write a character that spoke to readers in a different way. She has a quiet strength, and I hope you will love her.

3. If you could live in the regency time period, would you? Why or why not?

This is a tricky question, haha! I would LOVE to visit the Regency, but I don’t think I could quite bring myself to give up modern conveniences. If I had to choose, I think I’d rather relive the period by reading books and watching movies, and keep my hot showers and AC.

4. Since you write historical fiction, what is the most unusual thing you've come across in your research of the time period?

While researching a certain scene for the ending of Secrets and Suitors, I came across the most hilarious event. Two Frenchmen in the 1830’s were said to have fought a duel using billiard balls! I can’t even imagine, but I sure laughed a lot when I read that.

5. Do you have any future books in the works? I would love a story about Ralph!

I’m currently working on a sequel to my debut novel, The Truth about Miss Ashbourne. This new book features Rebecca Rowley, the sister to the hero of that story, and I am having so much fun with it! But one day I would so love to write a story for Ralph! He deserves his own happy ending, doesn’t he??

6. Was there something that inspired you to write Secrets and Suitors?
I wanted so badly to write a best friends love story, and I went through about eight different versions of this story before deciding on the plot. What finally helped me nail down the idea was hearing Ed Sheeran’s “Perfect” on the radio and realizing it described so perfectly the story I wanted to write. This song brought to life James Allen’s character, and if you listen to it after reading Secrets and Suitors, you might see how the chorus inspired the garden party scene J

7. When is your favorite time of day to write?
When at all possible, I love to write in the afternoon! I am neither an early worm or a night owl, and so my brain functions better in the middle of the day. Unfortunately, that seems to be the time when my kids are determined to distract me the most, so I rarely get to write then. But early evening would be a close second, once the house gets quiet after bedtime.

8. Is there another genre of books that you would like to write about?
I adore YA fantasy, and I have an idea that’s been itching at me for a while! It’s pretty far down the line, but I hope I get to it one day!

9. What is your favorite genre of book to read when you have the time?

This would probably have to be fairy tale retellings! It doesn’t matter the specific genre, but if an author can twist a familiar tale into something new and unique, I’m all in! My favorites are The Lunar Chronicles, The Goose Girl, and Ella Enchanted. In fact, I love retellings so much, I wrote a Regency retelling of Beauty and the Beast, titled (appropriately, haha), Beauty and the Baron. It was so much fun I might have to do it again one day!

10. What was an early experience where you learned that language had power?

I thought a lot about this question, so thank you for asking it! When I was in fifth grade, I wrote my first—terrible—book. I had a teacher I really loved, and so I showed the first few chapters to her. After reading it, she asked if she could read the first chapter out loud to the entire class! I said yes for some reason I really can’t remember, and was so embarrassed when she actually did read it. But then she came up to me after and told me she couldn’t wait until I finished because she was dying to read the ending. It was the first glimpse that I had of the power of storytelling, even though I’d been a reader all my life. The idea that my words could create an emotional response in someone else? It was incredible, and I’ve never forgotten that experience. 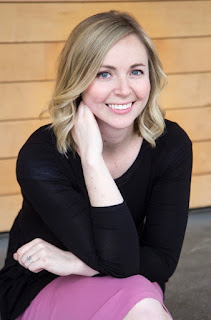 ​Joanna Barker was born and raised in northern California. She discovered her love for historical fiction after visiting England as an eleven-year-old, and subsequently read every Jane Austen book she could get her hands on. After graduating Brigham Young University with a degree in English, she worked as an acquisitions editor before devoting herself full-time to writing. She enjoys music, chocolate, and reading everything from romance to science fiction. She lives in Utah and is just a little crazy about her husband and two wild-but-loveable boys.

I'm excited to read this one, great review!

I love Historical Romance. Thank you

Thanks so much, Beaming!