Book Mail! See What Books Are Coming Up For Review! 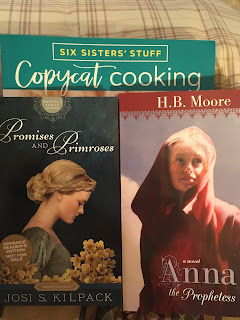 I love getting review books in the mail and I'm really excited about these three!

Promises and Primroses by Josi Kilpack is introducing the Mayfield family. Here's the teaser for that one: A wise old uncle aims to correct the very messy marital mistakes and spousal scandals of his generation of brothers and sisters by requiring their offspring--his nieces and nephews--to endure a ''marriage campaign'' to help them make good and respectable matches...and win their share of the family's inheritance.

Anna the Prophetess intrigues me because you don't generally read a lot about the women in the Bible who held these sorts of positions. And I am a huge H.B. Moore fan so I know this one will be good. Here's the teaser for it: Anna the Prophetess is the dramatic chronicle of the only woman to be called a prophetess in the Gospels. When Anna's great-niece Julia is exiled to Jerusalem as punishment for her refusal to marry a man old enough to be her father, Anna shares the story of her early days of courtship with her husband. Although Julia's parents admonished her to observe firsthand how lonely Anna's life is, Julia instead discovers that her great-aunt's life is far from lonely--it is full of love, peace, and incredible faith. As Anna shares her unwavering testimony of the coming Messiah with her great-niece, these two faithful women are changed forever as they seek the Lord's will in their lives and joyfully witness the long-awaited miracles of Christ's birth.

And the third one that I'm REALLY looking forward to reviewing is Six Sisters' Stuff Copycat Cooking because they have the recipes for some of my very favorite dishes from my very favorite restaurants in there! (Hopefully this won't be like my Pinterest fails.) Here's some of the recipes included:

I am really excited to try some of these and see how close the taste is to the restaurant dish!

So now you know the three books I'm excited to review in the next little bit. Do you have any books coming out in the next few weeks that you're looking forward to?
Posted by Julie Coulter Bellon at 10:11 PM

Currently reading a preview copy of Promises and Primroses. It is GREAT!

I can't wait to dive into that one!