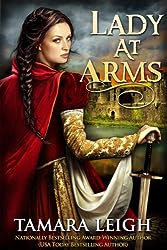 Today's Friday Freebie is a clean medieval romance called Lady At Arms by Tamera Leigh, a USA Today bestselling author. From the description, this heroine looks like she's no wilting violet! I know what I'll be reading this weekend. You can download your free Kindle copy here

HE WAS THE VILEST OF MEN


Lizanne Balmaine has spent years honing her skills at arms, determined she will never again be at the mercy of any man. When she comes face to face with the one who stole her future, she seizes the opportunity to exact revenge. Soon he is her prisoner, at her mercy. But something is different about him, something that makes her question her purpose. Is it possible a man can be so changed? More, can she right the wrong that could lay ruin to her family?

SHE WAS A QUESTION NEVER BEFORE ASKED OF HIM

Ranulf Wardieu does not seek a bride, nor a settling of scores when his mission for the king places him in the path of a beguiling, raven-haired maiden. But fascination turns to fury when she imprisons him. Accused of wrongdoing, the nature of which she refuses to reveal, he discovers the lady is as skilled at wielding a sword as she is at verbal sparring. When he bests her at her game and his jailer becomes his captive, he is determined to learn what wrong he has done her. However, as they engage in a battle of wits and wills and he glimpses her woman’s heart, he discovers Lizanne is a question never before asked of him—one his own jaded heart refuses to answer.
Posted by Julie Coulter Bellon at 9:35 AM

Thank you for sharing, Julie. Write on :)