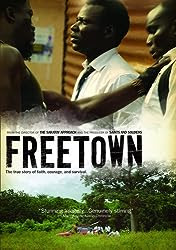 I was anxious to watch the movie Freetown because I'd heard so many good things about it and it didn't disappoint me.  I put my youngest children to bed and the rest of my children (12 and older) watched it with me. (Which I recommend because of the violence and war might be a bit too much for those under twelve.)

First of all, I loved the music and how we were transported immediately to the war taking place in Liberia.  The opening scenes are of rebels approaching a man whose car is stuck in the mud. They have automatic weapons and he has nothing. It is so tense!  My older son who served an LDS mission where there were a lot of Liberian people told me that they all had stories of how they'd escaped the horrors of this war, but at a great cost, including, sometimes, leaving children and spouses behind. It sounded like it was devastating and the movie really put you right there.

We then meet the LDS missionaries who are trying to teach the gospel of Jesus Christ during the violence.  After one particularly terrifying event, they decide to go to Freetown, Sierra Leone where they might have a chance to teach the gospel without fearing for their lives.  And so begins the incredible journey of what these people went through to do that. So much faith was required and so many miracles happened, it truly was amazing, especially since this is based on a true story.

I was impressed with the cinematography and the music. I thought the casting department did a great job. I did miss some of the dialogue at times because of background noises and music, but other than that, I thought it was inspiring and shone a light on the bravery and courage of our brothers and sisters in Liberia.

If you would like to a chance to win a free DVD of Freetown, all you have to do is tell me in the comments what was the best movie you saw this summer!  Contest open to the continental U.S. and the winner will be announced on Aug. 21.

Here's what it's about:

Freetown: Caught in the middle of a brutal civil war, six Liberian missionaries in Monrovia flee the widespread violence in their native country. Their destination: Freetown, Sierra Leone. With the help of local church member Phillip Abubakar (Henry Adofo), the missionaries make the difficult journey, only to have their troubles compounded by a rebel fighter bent on killing one of their own. Based on incredible true events, FREETOWN is a thrilling and inspiring story of faith, hope and survival.

Email ThisBlogThis!Share to TwitterShare to FacebookShare to Pinterest
Labels: giveaway

After not going to the movies for over a year (I just watch them at home borrowing movies from the library for free...), we went out to see the new Mission Impossible movie and it was really good. I don't remember ANY swearing and it was interesting and fun. And bonus, I won those movie tickets. =)
The Freetown movie sounds like a good show to learn about the history. I love movies like that.

We do not get the chance to get out to the show house to see movies due to the high prices and so we wait until they come out to redbox or netflix. The last movie we saw as a family was Night at the Museum: Secret of the Tomb. It is the 3rd in the series and we own the first 2. We really love the comedy in these shows. They are really funny. We also like the all the history involved in each one.

We saw Far from the Madding Crowd and loved it.

I saw insurgent! It was a pretty good movie better then I thought!

On a rare date night we saw Marvel's Ant-Man. I liked it. It had a great cross between (tiny) superhero action and side-cramping comedy.

My husband and I both loved "The Cokeville Miracle." It was hard fighting back the tears in the theater. So moving and faith building. It gives you chills when you see the children talk about what really happened that day and the Divine Intervention to their faithful and simple prayers.

My all time favorite movie for the summer was "Ibside Out." That is a definite buy movie when it comes out on DVD. And my whole family agrees that while there were funny scenes throughout the movie the best one was when the boy bumps into the girl. If you haven't seen it yet, it is a must see.

My 14 year old is a big comic book/super hero fan so when he wanted to see Marvels Ant Man this summer he didn't want to go alone. He decided to treat me to a movie for my birthday so we went and saw it together! That was the best being treated to a movie by my son! It was a good movie too!

I really enjoyed the Cokeville Miracle and Jurasic World. I remember when the bombing happened and have read about it and years ago watched the television movie with Richard Thomas so I was so excited to see The Cokeville a Miracle, and loved how they focused on the miracles.