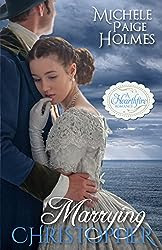 Today I'm excited to be part of the blog tour for Marrying Christopher by Michele Paige Holmes. I've really enjoyed the other two books in the series and this one wraps it up nicely.  (You can see my review for Book 1, Saving Grace here and my review for Book 2 Loving Helen here)

Little brother Christopher has spent his life trying to protect his older sisters.  Now that they are both happily married and settled, he's going to strike out on his own and hopefully bring some pride to the Thatcher name.  He books passage on a ship to America and stubbornly refuses to take any money from his sisters. He's going to make his own way, hopefully be able to work and maybe even own some land he can farm. He finally has some of the freedom he's dreamed of.

Until he meets Marsali Abbott.  Marsali is fleeing an abusive situation and gets on the same ship as Christopher. Unfortunately, she's not sailing toward freedom, but toward a four year indenture, and with that in mind, she decides to enjoy the few weeks to herself on the ship.  Things get even more complicated, though, when Marsali gets to know Christopher.  His kindness draws her to him, but her own growing feelings keeps her wanting to be near.  But she's an indentured servant and would never want him to sacrifice his dreams for her, even when she finally realizes exactly what awaits her when they dock in America.

This historical romance totally swept me away. The shipboard scenes were especially well done and I thought the author did a great job with her research because the little details she included really made it feel real.  I loved Marsali's strength and how she was still vulnerable when it came to her life decisions.  Christopher, though, was a swoon-worthy hero and I loved his character.  Their love story was even better because there were a lot of unexpected twists and turns on the journey which kept me turning pages long after I should have gone to bed. The ending was totally worth the sleep sacrifice, though!

Having seen both his sisters Grace and Helen happily married, Christopher Thatcher is free to pursue his dream of life in America. With adventure in his heart and mind, he boards one of the first steamships set to cross the Atlantic in the record breaking time of only twenty-five days. Within the first two of those, his resolve—to avoid women and the complications they often bring to a man’s life—falters when he meets Marsali Abbott, a young woman with a past even more troubling than his own. Whether from years of habit protecting his sisters, or simply because he feels drawn to Marsali, Christopher chooses to help her and becomes her friend. As the truth about what awaits Marsali in America becomes evident, he is faced with a more difficult choice, one that will impact their lives far beyond four weeks together at sea.
Posted by Julie Coulter Bellon at 10:54 AM

Thank you, Julie! Praise from such a great author means a lot.

Thank you, Julie! Praise from such a great author means a lot.