I haven't read this book, but the description looks good so I thought I'd pass it along. It's Love Me Always by Marie Higgins. 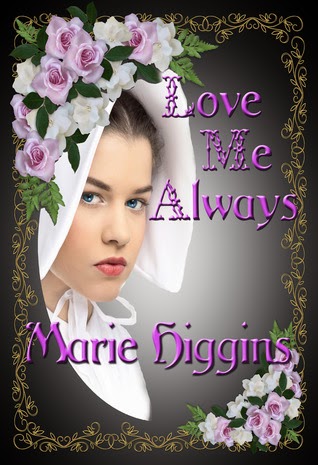 Here's the back copy and an excerpt:

No Way Out – Catherine Martin is trapped. Either she wed an elderly man and commit to a marriage without love, or continue living with the father who believes her guilty of murder and one foot outside the asylum. Catherine picks marriage to the Duke of Ashton, Grant Fielding. However, when she stays with the Fielding family before the wedding, she doesn’t plan on falling in love…with Grant’s nephew, Nicholas.

Destined for a lonely life – Nicholas Fielding loves his uncle’s soon-to-be bride, and has loved her since they were children. Now Nick must choose between his dying uncle's last wish to marry, and the woman who will make Nick happy for the rest of his life. No matter how hard Nick tries, he cannot stop his love for Catherine.

A flurry of accidents begins to happen around the Fielding estate and soon all accusing eyes turn to Catherine. When accidents escalate to murder, suspicions expound and even Catherine’s father believes she’s gone mad. Does Nick love her enough to discover the truth?

****
Nick walked through the hallway, heading toward the staircase when the sweet voice of a woman cursing floated through the air. He bit his bottom lip to keep from laughing. Obviously the woman thought she was the only one in the house. After he turned the corner and noticed the person in question was Catherine, he did laugh – and hard.

She jumped from his sudden outburst and stopped on the stairs. Her face flamed at least three shades of red, which made his laughter grow.

“The perfect Catherine has a flaw after all.” Nick leaned his hip against the banister and stared up at her. She looked extremely lovely right now; so pure and sweet, but mostly intoxicating even with a scarlet-colored face.

“I’m not perfect,” she snapped and straightened her back as she continued to descend.

He chuckled. “Yes, I know, but there for a while, I thought you were.”

She stopped on the step in front of him. “You…you…you were not supposed to hear that.”

“Obviously, but I’m very grateful you rewarded me the privilege.”

She huffed. “If you were a real gentleman, you would pretend not to hear, and you would certainly not tease me about it.”

She was so adorable right now, making him want to laugh and to be by her side for the rest of the evening. But it was more than that. He wanted her in his arms. Now.

No, he argued with himself. Being so personal would only cause him pain. He must make her mad at him. That was the only way.

Laughter quickly left him as he moved in front of her. Since she stood on the bottom step, it made her exactly his height. “What makes you presume I’m a gentleman?”

Confusion creased her brow. “Nicholas? What are you saying? Of course you are a gentleman.”

In one quick motion, he clamped his hands around her waist and roughly pulled her against him. She gasped. Was it in fear or excitement? He couldn’t be certain, but the sweet sound of her voice turned his insides to honey.

“I’m not going to lie to you and tell you I’m a gentleman. In fact, my sweet Catherine, I will warn you. Most women consider me a scoundrel, so beware. You don’t want to play your feminine games with me because if you do, you shall not escape unscathed.”

His original intent was to frighten her so she’d leave him alone, slap him, or say something hateful to make him stop. Instead, the heavy breaths fanning his face and the way she quivered told him she wasn’t frightened at all.

Her gaze dropped to his mouth, and suddenly the urge to kiss her overpowered him. As hard as he tried to fight it, he knew he couldn’t resist this time.

He roughly pressed his mouth to hers. It was a kiss meant to punish her. Instead, it tortured him. Her lips were so very soft. Pulling back, he hesitated. What was he doing? She leaned forward, her eyes closed. He was done for!

If you're interested in downloading a free Kindle copy click here
Posted by Julie Coulter Bellon at 3:00 PM

Thanks for the link!