I did a book signing with Carla Kelly once and was surprised by the mountain of historical knowledge inside this tiny woman. Yet, she's still relatable and friendly.  I started reading her books after that day and today I want to tell you about four of them!

Safe Passage is about the Mexican revolution when LDS Saints were fleeing the country and one man, Ammon Hancock, who is estranged from his wife, finds that his wife didn't make it out with the rest of the saints.  He goes back to save her and the adventure he has along the way kept me turning pages long into the wee hours of the morning.  I honestly didn't know very many details of the revolution and how it affected even the lowliest servant.  But this book is much more than a history lesson.  It has humor and romance and fear and guilt and sucks you into the lives of these people until you feel like you know them as well as your best friend. This book was recently named a Whitney finalist as well and it is well-deserving of the honor.

It's 1912, the beginning of the Mexican Revolution-and the Mormon colonists must flee to the United States. When his estranged wife is mistakenly left behind, Ammon Hancock goes back to rescue her. But when he finds her, he must coax her to follow him to safety... and maybe even love him again. This revolution could be the very thing that ends their war of hearts 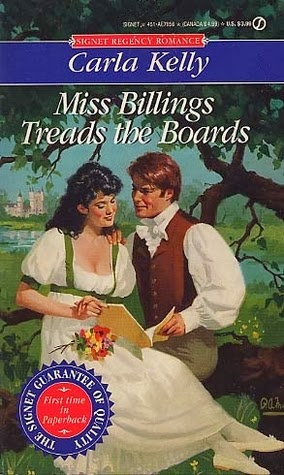 This one was a bit of a departure from Ms. Kelly's normal books in that there's not a lot of history, nothing very nautical, no really tortured hero---it's just lighter somehow.  It centers around a woman whose circumstances bring her to the stage and a wacky cast of characters.  She's trying to save their livelihood and save her own reputation while getting embroiled in the problems of a "missing" marquess who needs her to pretend she's his wife until he can sort out the matter of a relative trying to kill him.  It's farcical and yet still has magical moments.  It's also full of missteps for the characters, but is all's well that ends well? You'll have to read to find out.

Miss Katherine Billings was cast in a most unlikely role for a vicar's daughter. But beautiful Kate was an impoverished orphan—and her only escape from a lecherous employer's embraces was to go upon the stage.

It was dangerous enough that a charming French playwright wanted her as his leading lady, and an ambitious impresario demanded that she bare her charms to an eager audience.

But when a magnificent marquess, Lord Henry Grayson, proposed that she join him in a masquerade of mating in a mock marriage, Kate found that putting on an act in public could be even more perilous in private...if the act was an act of love 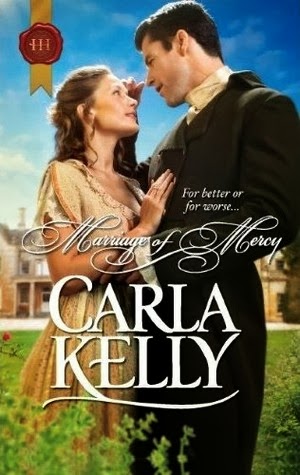 I just finished this one and stayed up way too late to see how it would end.  There was a twist that I really didn't see coming and I knew I wouldn't be able to sleep until I figured everything out!  This one has our heroine, Grace, as an orphan put upon the mercy of the bakers of the village. Her own father was a baronet who spent far beyond his means, so when he died, Grace was nearly penniless.  The bakers take her in and she befriends an old noble man who likes her unique pastries.

When he passes his will is read and there's an interesting gift left to Grace---she can have the dower house and thirty pounds a year if she'll just get his illegitimate American son out of the POW prison and care for him until the war ends.

Grace decides to take the unusual inheritance, but from the second she meets the POW son, nothing goes as planned.  The son is dying and with seconds to spare before the unrelenting prison warden figures things out, Grace is asked to take one of his men and save them.  But how can she ever choose?  It's a love story between two people torn by the war of 1812 and the countries and circumstances they find themselves in. For my gentle readers, this one has some intimate scenes, but they are very brief.

From riches to rags, Grace has had to swallow her pride and get a job as a baker. But everything changes when she's the beneficiary of a surprise inheritance.Her benefactor's deal comes with a catch: give up her life of toil and live in luxury only if she marries his illegitimate son, a prisoner of war. It's an offer she can't afford to refuse. But her husband-to-be is dying, and he begs her to take one of his men instead—to marry purely out of mercy….

A marriage of convenience with a complete stranger… Could this arrangement ever work? 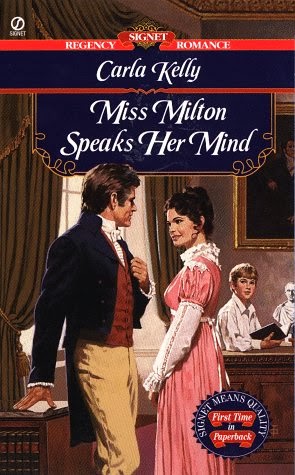 I've just started this one and so far it has all the elements of a good Carla Kelly story---great background, two people with emotional obstacles to overcome. That's one thing about Ms. Kelly's stories that I like is how her characters seem so real with the problems and emotions they need to work through. This one is starting out with that same style for sure.

A lovely young woman is the guardian of her cousin's son, whom she has cared for since his parents's death, and loved as her own. Her wealthy relatives question the true parentage of the boy, placing his inheritance and their future in jeopardy. Then a handsome mill owner offered to tutor the young boy, catching the eye of his guardian, as well. But could she really find love while harboring a scandalous secret than no man could know
Posted by Julie Coulter Bellon at 12:35 PM

I was out of town ALL day yesterday, and basically passed out last night, or I would've seen these wonderful reviews. I don't have these Carla Kelly books. I'll need to change that fact!