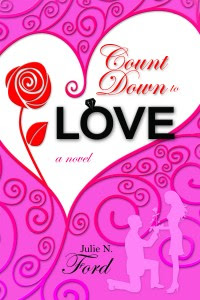 I've been getting to bed quite late these days, so I was pretty happy when I was able to get into bed at 10:30 p.m. on Friday night. (Yeah, I know, I must be getting old to make that statement.) Anyway, I thought I'd read for fifteen minutes before I turned in and I had Countdown to Love by Julie Ford on my Kindle that I'd been meaning to start. So I picked it up.

That was my first mistake.

Holy cow. That book sucked me in so fast before I knew it it was 2:30 a.m. and I was finishing the last page. It was funny and heartwarming and fluffy and fiery. I loved it.

So, here's the premise: We are introduced to Kelly Grace, a country singer, and it's her wedding day. She's staring into the mirror and feeling in the pit of her stomach something is going to go wrong. Something does go horribly wrong and circumstances are such that she ends up on the reality TV show "Countdown to Love," similar to "The Bachelor."

I will admit to you that I watched the Bachelor reality show until they gave a second chance to that guy who didn't choose any girl the first time around (I stopped watching after that because I didn't think he deserved a second chance and I wasn't going to watch him again, besides which, the show was getting repetitive and dumb and over the top. But I digress.) So to have a book that was obviously a takeoff on that show, that had behind the scenes stuff that felt so real and was funny, combined with a guy, Dillon, who is actually likeable and complicated, well, that really drew me in. Plus, I loved Kelly's character because she was relatable and the scenes between her and the other "contestants" were laugh out loud funny and something I could totally imagine happening. Kelly's southern girl status as a person who tells it like it is, (a girl after my own heart) is the perfect opposite to Dillon, a New Yorker with a mysterious air about him. They were just the ingredients for a romance that honestly kept me up half the night just so I could see what happened.

The only thing I was disappointed in was that this book was screaming for an epilogue. One practically wrote itself as a juxtaposition to the original first scene in the book. Hence, I mentally wrote my own epilogue and without giving anything away, it was in Wyoming, it had wildflowers in it, and maybe a mirror with a whole different girl staring out of it. *le sigh*

If you are looking for a fun romantic read, this is definitely the book for you. Here's the back copy:

Kelly Grace Pickens is an excited bride - until she's abandoned at the altar. Desperate, she accepts an offer to appear on a reality TV show, Count Down to Love. Her country ways are a stark contrast to the mysterious bachelor from New York. Wading through hurt and betrayal both on and off screen, Kelly discovers that being true to yourself is essential to finding happiness and love.
Posted by Julie Coulter Bellon at 8:00 AM

Oh... I can't watch the Bachelor. I can't stand their "dating," smooching on each other and such. So I'm not sure this book is for me, although I love Kelly Grace's name. It could be because she used "Grace" where I had to change my character's name 4 times before submitting it, and of course, there is the beautiful Princess Grace Kelly.

Julie, when do you find time to sleep? You're either reading or writing or taking care of you family. Goodness . . .

Debra, how funny, when I was reading there was a really funny part and I thought to myself, I bet Debra would like this book. I think you would. At least you should read the first two chapters. It sucks you right in!

Debra, as for sleeping, I'm still having trouble with that . . . I wonder why! haha

LOL! Oh, I guess I should look into the Kindle version, only because you said so.

Oh, I love the sound of this one. I don't watch that show, but I love books that are set in 'versions' of reality shows :-)