I am participating in the blog tour of I, Spy, and Mr. Nice Spy by Jordan McCollum.  I am so excited about these books.  If you want a fun and sassy heroine who's juggling her spy life with real life, then this is the series for you.  I love the voice of the main character Talia in I, Spy, because she feels so real and yet someone that I could be friends with.  You all know how I loved the TV series, Alias, and this reminds me a bit of that.  It's also set in Canada and since I'm Canadian, well, it's like two perfect worlds have collided for me.

Her partner, Elliott, is also trying to juggle real life with his spy life and I was pleasantly surprised to find out what makes him tick and how his partnership with Talia figures into his life in the prequel novella, Mr. Nice Spy.  (I read the book, I Spy, first.)  Ms. McCollum has created a cast of characters that are memorable and make me anxious to see the series continue just so I can find out what happens to them!

And, on the spur of the moment side, I submitted a question for a spy tip and it was, "How can a mom enjoy candy without her kids noticing and wanting her to share?" which spy novelist, Jordan McCollum answered below in the video.  So fun!

Point of this story?  If you're looking for the perfect summer read, then this is it.  I loved these books and highly recommend them to anyone.  You can read more about the blog tour and launch, get a cool spy tip for your daily life and download a free copy below!  (For the launch, you can also find Mr. Nice Spy on Amazon, Kobo, and JordanMcCollum.com!) 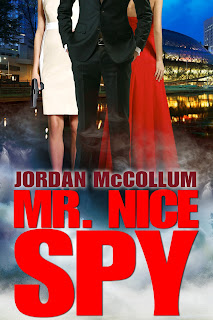 Canada is probably the last place you'd expect to find an American spy. CIA operative Elliott Monteith has made it work, just like he's made things work with his longtime fiancée Shanna. Until Shanna lays out an ultimatum: move forward or move on. Meanwhile, Elliott and his best friend and fellow operative, Talia Reynolds, try to track an elusive leak at the American embassy. But something changes between Elliott and Talia as they close in on the man selling out his country. Professional and personal lines blur and Elliott has to choose—his fiancée or his best friend. More about Mr. Nice Spy | Add Mr. Nice Spy to your Goodreads to-read list!

Mr. Nice Spy is a prequel to the novel I, Spy, available now. To save her country and her secrets, CIA operative Talia Reynolds will have to sacrifice the man she loves. More about I, Spy.

An award-winning author, Jordan McCollum can’t resist a story where good defeats evil and true love conquers all. In her day job, she coerces people to do things they don’t want to, elicits information and generally manipulates the people she loves most—she’s a mom. Jordan holds a degree in American Studies and Linguistics from Brigham Young University. When she catches a spare minute, her hobbies include reading, knitting and music. She lives with her husband and four children in Utah.

Want to enjoy candy without having to give it all to your kids? Find out how to use spy skills to get away with it! Further hone your spy skills by reading Mr. Nice Spy!

As part of the debut of Mr. Nice Spy, Jordan is hosting a contest to figure out the "theme" song for the story. Collect clues at each blog stop and use your spy skills to piece together the clues to win a $25 Amazon gift card!! Click here to enter.

The clue for this stop is:


The single-word name of the Mr. Nice Spy song appears in Chapter 2 of the novella.

Thanks for participating in this launch tour! As a free gift this week, Jordan is giving out free copies of Mr. Nice Spy! Simply to go http://JordanMcCollum.com/store/. You can also get 40% off I, Spy!
Posted by Julie Coulter Bellon at 7:30 AM

Bravo for Jordan! I'm going to have to read that. (Should I read it before Dan Brown's latest book or after?)

And you can read it before or after Dan Brown's, as long as you read it ;) .

Thanks so much, Julie!!

Haha, love the video!! Thanks for the tip on these spy books--they look really good and I've added them to my TBR pile and hope I get to them before the end of the summer!

I haven't been able to find the one word song yet, but then my reading was interrupted when my son texted and told us his wife is in labor and now would be a good time to come! Aaaah!!! We have a granddaughter!!!

I will have to use Jordan's candy unwrapping tricks ... uh, never mind. I'm a grandmother. I want to spoil her!

Thanks, Melanie & Deb! And congrats, Deb!