The Capture Is Live! (And A Freebie!) 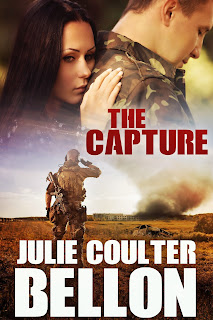 I am so thrilled to announce the release of my new novel, The Capture. Since I write romantic military suspense, I do a lot of research and have been able to meet so many veterans who inspire me with their sacrifices and how they express their feelings about the service and their fallen friends. I'm feeling especially tender about this book being released today and hope that respect comes through. This book feels like it's been so long in coming, I am so excited that it's finally here! (And we'll be partying with prizes on the blog tomorrow, so check back!)

Julian Bennet, head of Griffin Force, finally finds love with Zaya Altes, but the day he buys her an engagement ring, international terrorist Nazer al-Raimi abducts her. Getting her back consumes him, yet it takes nearly six months to find her. The daring mission to extract her from a hidden prison in Afghanistan is successful, but Zaya has suffered during captivity. Though she’s grateful to Julian for breaking her out, she wants nothing to do with him. Before he can show her how much he still loves her, Nazer finds them and vows revenge. Can Julian keep Zaya safe and still stop Nazer once and for all?

Zaya Altes nearly gave up hope of ever being rescued, but when Griffin Force finally finds her, returning to life is harder than she imagined. While her feelings for Julian are as strong as ever, she feels too broken to recapture what they once had. Instead, Zaya jumps at a chance to trap Nazer, wanting vengeance for what she’s endured. As the final showdown draws near, however, Zaya will have to make an unimaginable choice to let Nazer close to her again. But when a shocking web of betrayal is uncovered in their own ranks, their one chance to capture him is compromised. Julian and Zaya will put everything on the line, but can they survive this ultimate test and finally reach for their chance at happiness?

If you haven't read the first book in the series, The Captive, it is FREE until Wednesday. So be sure to grab your copy here

Former Navy SEAL Jake Williams is the newly appointed head of a task force assigned to rescue a kidnapped American diplomat. Their only hope is Mya Amari, the daughter of a notorious Algerian hostage negotiator, but she is full of secrets and complications--something Jake takes as a personal challenge. As they grow closer, the threat to the mission escalates and time runs out for the hostages. Can Jake unravel the web of deception to save them all without getting caught in the crossfire?

Mya Amari has been in hiding nearly her entire life to escape her father's enemies. But when her sister is kidnapped along with an American diplomat, she'll do anything to bring her home--including walking into the enemy's lair. She doesn't trust anyone, especially the too-handsome-for-his-own-good Commander Williams, but when all her careful plans explode out of control, he's the only one she can turn to with the truth about her family. Is it too little, too late?
Posted by Julie Coulter Bellon at 9:19 PM