Book Review: Merchant and the Rogue 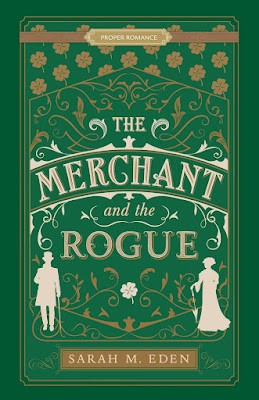 I wanted to do this book review right when The Merchant and the Rogue came out, but I was right in the middle of my illness. As a big Sarah Eden fan, though, I didn't want you to miss this one!

In this new installment of the Dread Penny Society series, we get to know more about Brogan Donnelly, who we were introduced to in a previous book. Brogan is from Ireland and has a few secrets about why he left his homeland. But he has carved a life for himself in London, writing penny dreadfuls and being part of the Dread Penny Society. When the mysterious head of the society asks him to go undercover, Brogan isn't entirely sure of the assignment, but does as he's asked. He gets a job at a print shop that has had a lot of suspicious comings and goings. While there, he meets Vera, who is the daughter of the print shop's owner. Vera has a hard time trusting others, and it takes time for Brogan to earn her trust, and the scenes they have together are full of wit and charm as they begin to know each other and perhaps have feelings that are more than friendship. But when Brogan's undercover work begins to bear fruit, and the reason for the suspicious activities come to light, can Brogan and Vera overcome the obstacles that might snatch away their chance for happiness?

I really enjoyed this story that is so detailed with characters who are so vivid and relatable. Brogan has lived through some really difficult trials and the stakes that are first presented at the beginning of the book get even higher as his past comes back to haunt him and threaten his future. His romance with Vera is sweet and sigh-worthy. I loved that Vera was such an intelligent character, strong, yet still vulnerable. She also has left her home country and has a past that rears its ugly head. The author shines in her ability to intertwine lives and events with deep emotion that draws you in and holds you captive in between the pages. My only complaint is that there are two penny dreadful stories interspersed within the actual book and it stalls the pacing and pulls me out of the spell the book weaves around the reader. While I do enjoy the shorter penny dreadful stories, I wish they would put them at the end of the book. Other than that one tiny thing, this is a wonderful addition to the series and one you won't want to miss!

Get your copy HERE

Vera Sorokina loves reading the Penny Dreadfuls and immersing herself in tales of adventure, mystery, and romance. Her own days are filled with the often mundane work of running the book and print shop she owns with her father. The shop offers her the freedom and income to employ and protect the poverty-stricken Londoners she's come to care about, and it gives her father something to do other than long for their hometown of St. Petersburg. She is grateful for the stability in their lives, but she often feels lonely.

Brogan Donnelly was born and raised in Ireland, but has lived in London for several years, where he's built a career as a Penny Dreadful writer. He has dedicated himself to the plight of the poor with the help of his sister. His membership in the secretive Dread Penny Society allows him to feel he isn't entirely wasting his life, yet he feels dissatisfied. With no one to share his life with but his sister, he fears London will never truly feel like home.

Brogan and Vera's paths cross, and the attraction is both immediate and ill-advised. Vera knows from past experience that writers are never to be trusted, and Brogan has reason to suspect not everything at her print shop is aboveboard. When the growing criminal enterprise run by the elusive and violent Mastiff begins targeting their area of London, Brogan and Vera must work together to protect the community they've both grown to love. But that means they'll need to learn to trust each other with dangerous secrets that have followed both of them from their home countries.
Posted by Julie Coulter Bellon at 2:20 PM