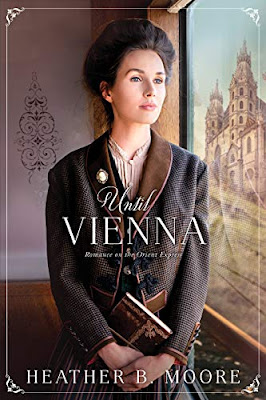 I was excited to read the next installment in the Orient Express series. Heather Moore's Until Vienna was a tender romance with lots of detail and depth. (Isn't that a great cover?)

Gigi is asked to travel with her Aunt Rowena on an art tour across Europe. Their tour director is handsome Clyde Haskins, but when it becomes clear Aunt Rowena is trying to play matchmaker for Gigi and Clyde, Clyde informs them he is a confirmed bachelor after having his heart broken. But as the tour continues, Clyde and Gigi find an unexpected friendship. Could it ever be more?

I really enjoyed the backdrop of the Orient Express for this sweet romance. The details and descriptions made it so easy to feel like you were right there with the characters! Gigi has hopes and dreams, some of which have been dashed. When the secret comes out about why her beau abruptly left her, Gigi has to examine her thoughts and feelings and decide if she's ready to move on. The friendship and blossoming romance between her and Clyde was paced well and had some really great moments---and swoon-worthy kisses! Clyde was a solid hero, and his kind attentions to Aunt Rowena and her friends would make the hardest heart melt. And of course, Gigi slips behind his wall of defenses and burrows her way into his affections in a way that takes him by surprise. It's really sweet, actually. Readers will root for this couple to find their happily-ever-after, and enjoy the exotic setting locations.

Georgina Ballard has been disappointed in love more than a few times, a fact that she is uncomfortably aware of amid her sister’s wedding preparations. When her elderly aunt Rowena bids Gigi to accompany her on an art tour across Europe, Gigi hesitates but eventually resigns herself to the train journey alongside a group of aged art connoisseurs, if only to mollify her aunt.

Once aboard the Orient Express, Gigi is pleased to discover that not everyone on the tour is in their twilight years: Clyde Haskins, an energetic young art professor from the University of London, will serve as the group’s tour guide. Clyde is equally intrigued that a young lady has joined the tour, and Aunt Rowena and her friends immediately set out to play matchmaker. Clyde and Gigi both find humor in Aunt Rowena’s antics despite knowing that each is determined to keep their heart carefully guarded. Yet, the enchantment of their European exploration weaves an undeniable spell between them. When their journey ends, can their holiday love story endure the obstacles of real life?
Posted by Julie Coulter Bellon at 12:10 PM