First of all, if you had a First Page Friday critique done by Angela Eschler, you can sign up for free industry-insights at their website and be entered to win one of several editorial consults.  A really great prize from an awesome company!  All you have to do is go to EschlerEditing.com and sign up!

Early next week they''ll be picking the winners, so don't delay! 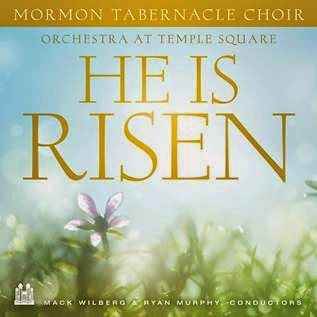 Second, I want to tell you about this amazing brand new CD from the Mormon Tabernacle Choir called He Is Risen.  When I first put the CD in, it was a gloomy, cloudy day and I'm afraid my mood was matching the weather.  This CD really lifted me, like sunshine breaking through the clouds.  It was especially moving for me as I prepare for the upcoming Easter season.

I liked how the songs went from a majestic He is Risen, with the full impact of the Orchestra at Temple Square, to a sweet rendition of In the Garden.  That is one of my favorite songs and the choir really gives it something special.  I thought the choir's voices hit all the right notes and this is a CD I will play long after Easter is gone.  A definite must-have for your own collection.

The 360 members of this remarkable choir represent men and women from many different backgrounds and professions and range in age from 25 to 60. They reflect a medley of unique lives and experiences and are brought together by their love for singing and their faith. Their incomparable voices are the common chord that unites to form the choral group known all over the world as the Mormon Tabernacle Choir.

Last, but not least, today I'd like to tell you about the second novella in the Ripple Effect series.  This one is about Drew Westfall, a minor character briefly introduced in the first novella, Home Matters.  Drew is traveling to Colorado after he's given up his family fortune. He's looking for a new direction in life and at first, is like a fish out of water.  When we are introduced to him in this book, his luck goes from bad to worse when he crashes his car in a snowstorrm, is only wearing an expensive leather coat with dress shoes on while he wades through inches of snow trying to find shelter. To top it off, some teenagers throw soda on him instead of helping him.  You can't help but feel sorry for this guy.  But that isn't even the worst of it.  He finds shelter at an assisted living center and while trying to find someone to help him get to his friend's house, he trips over a walker/wheelchair and whacks his head.  Yeah, talk about a bad day.

But the best thing about Drew's character is the way he gets up each time he's knocked down.  He's trying to overcome his past and really do something worthwhile with his life.  He's got a determination to him that I really liked and an easy manner.  He wasn't overbearing and when he meets our heroine, well, things get complicated fast in a good way.

Our heroine, Eden, is so sweet and trying so hard to care for everyone around her.  She's in a tight spot with having to put aside her dreams to take care of her sick mother, and yet there's a fire inside of her that wants to reach for it.  She has a boyfriend, but when she meets Drew, well, let's just say I was turning pages as fast as possible to see how it would all turn out! I love a really good romance.

The story has a sweet cast of characters in the assisted living center and a really great message underneath the romance.  I like the author's writing style and thought the novella had it all---great characters and a solid story.  So excited for the third one! 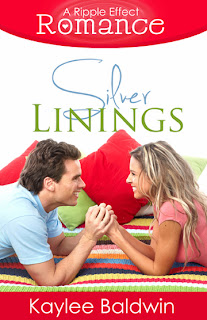 Silver Linings by Kaylee Baldwin Drew Westfall wants nothing more than to forget what he had to do in the name of "smart" business. Cutting off all ties with his parents—including handing over the entire contents of his trust fund to a charity—he takes off for Bridger, Colorado where his best friend has an extra room for him. It doesn't take long for him to realize that his business degree won’t do him much good in a town as small as Bridger, but he's broke and has nowhere else to go.

Eden Torresi has every reason to wallow. Not only did she have to sell her house to pay for her mother’s medical expenses, but she also had to drop out of school and is in a relationship with a guy unwilling to commit. But Eden isn't the wallowing type. Instead, she chooses to spend most of her time taking care of the seniors at Silver Linings Assisted Living. When she learns that her boyfriend's new roommate is down on his luck, her caring nature makes her want to reach out to him and offer what help she can. But the more time they spend together, the more complicated things get, especially when the seniors of Silver Linings decide to play matchmaker.

Author Kaylee Baldwin When Kaylee Baldwin isn’t writing, she’s usually chasing after her four children, checking her email, trying to get motivated to train for that race she shouldn’t have signed up for, hanging out with her pretty awesome husband, and reading whatever good book she can find. She graduated from Arizona State with degree in English Lit. Her published books are Meg’s Melody, Six Days of Christmas (part of the All I Want collection) and Silver Linings.

The Ripple Effect Romance Novella Series Enjoy this exciting new series of clean novellas by six critically-acclaimed authors. "Like a pebble tossed into calm water, a simple act can ripple outward and have a far-reaching effect on those we meet, perhaps setting a life on a different course—one filled with excitement, adventure, and sometimes even love." Book 1: Home Matters by Julie N. Ford Book 2: Silver Linings by Kaylee Baldwin Book 3: Righting A Wrong by Rachael Anderson Book 4: Lost and Found by Karey White Book 5: Second Chances 101 by Donna K. Weaver Book 6: Immersed by Jennifer Griffith

This sounds adorable. I'll look for it on Amazon.