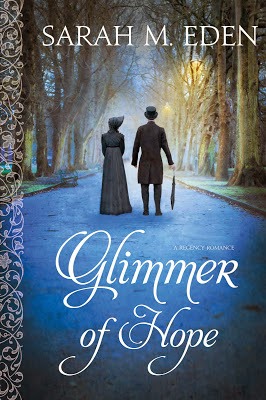 Today I want to tell you about a book by Sarah Eden called Glimmer of Hope.  I wasn't sure I wanted to read this book, even though I'm an avid Sarah Eden fan, because I had heard that it was really depressing.  I picked it up, though, and was hooked at the first page.

Our heroine, Miranda Harford, is coming home from a walk when her estranged husband of three years, Viscount Devereaux, appears suddenly.  She's under the impression he wanted nothing to do with her and can't imagine what's really going on.  The Viscount tells her he's hosting a house party and she better be ready to put their differences aside and act like the hostess she should have always been.  He wants to put her in her place, to show her what she walked away from, but has a hard time when he sees how hard she's trying to please him.  His mother and guests arrive and there are complications galore.  As a reader, I was kept turning pages by the misunderstandings between the couple.  Each thought the other had left them, and there were huge gaps in communication that I couldn't wait to see resolved.

It was a tender love story and I won't reveal any spoilers, but I have to admit I was moved to tears several times throughout the book.  I didn't find it a depressing book, however, but an emotional one, that shows the human condition and draws you into the intricacies of human relationships.  Sarah Eden is a master of romance and I found this novel to be no exception.  Just have a tissue handy!

Stunning Miranda Harford once had the world at her feet. She was young, carefree, and desperately in love. But when her new husband left for London without her, her world fell apart. Devastated by his abandonment, Miranda fled their home, taking residence at her husband’s rarely visited countryside estate. For three years, she lived alone. But now, as the holidays draw near, an unexpected visitor arrives . . .

Carter Alexander Harford, Seventh Viscount Devereaux, is a man driven to succeed. His work is his life, and the position of Prime Minister of England is within reach. But in truth, Carter is a man haunted by lost love. Estranged from his beautiful wife, Carter is shocked to find Miranda—the woman he’d loved and who he believes has left him—in residence at his country home.

As plans for a holiday party move forward, the uneasy couple realizes that to avoid further scandal, they must keep up appearances in a charade of marital happiness. Thrust together by fate, it quickly becomes clear that they have both been living beneath a conspired cloud of misunderstanding. As family, career, and social pressures threaten to keep them apart, can love have even a glimmer of hope?

Read it. Loved it!