Today I have two books to tell you about.  The first one is a regency romance by G.G. Vandagriff called Lord Trowbridge's Angel. 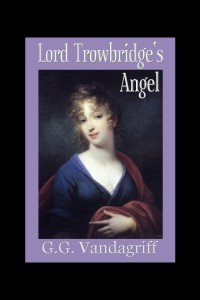 In this book we meet Viscount Frank Trowbridge who agrees to escort Miss Sophie Edwards to a ball.  Sophie isn't able to dance because of a childhood injury, so when he finds out she plays the violin, he introduces her to the musical people he knows.

Pretty soon he finds himself utterly entranced with the woman at his side and how she seems to light up the room when she's speaking about music and an upcoming performance.  Unfortunately, his mistress also sees his interest in Miss Sophie, there's illness, society expectations and that isn't even all the twists and turns for our hero and heroine with many more misunderstandings and obstacles to their newfound love.

I thought the setting was well done, but there were times when the viscount seemed a little naive in his actions and what society expected.  I liked Miss Sophie and was happy to catch up with her sisters who were heroines in previous books.  Ms. Vandagriff does not disappoint her historical fiction fans and this is another gem in her series.  (Currently on Kindle for .99 cents! Click here) (And no, I don't receive any compensation for providing that link, I just want to make things easy for my blog friends.)

When the very bored and very handsome Viscount Trowbridge agrees to escort Miss Sophie Edwards to her first ball, his life is upended. Because a childhood injury left her unable to dance, Sophie is new to the ton and not terribly interested in it. But our heroine has a secret weapon: she has mastered the violin.

The viscount, aka Gorgeous Frank, is unexpectedly and powerfully smitten the first time he hears her perform. Recognizing in Sophie a person more complex and passionate than any ton beauty, he launches a courtship calculated to win her in ways as original as she is.


Sophie is nearly bowled over, but a native disinclination to trust proves a serious challenge, as does Frank’s former mistress. At times, Frank is his own worst enemy. As he wades through a sea of misunderstandings, will his “angel” have the insight to believe that he is a changed man? Will Sophie avail herself of her sisters’ help, lower the barriers of a lifetime to trust him, and allow herself to fall in love? 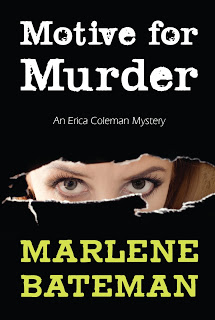 The second book I want to tell you about today is Motive for Murder by Marlene Bateman.  It is an Erica Coleman mystery, the first in that series.  Erica is a quirky former police officer and a current private investigator.  When she goes to Florida to visit her needy friend Wendy, she literally stumbles over a murder scene.  Her friend is very shaken and asks Erica to stay and investigate the murder, especially since it looks like her boyfriend may be involved since he knew the victim.

Erica agrees to stay, even though she has a husband and kids at home waiting for her, and starts delving into the murder.  Erica has OCD issues and sometimes comes across stilted in her conversation, but she is good at trying to observe clues that others have missed.  It quickly becomes clear to her that almost everyone who had been at Wendy's house that night had a motive to murder the victim and I was led on a merry chase trying to follow all the clues and figure out who did it before I turned the last page.  There were some pacing and editing issues that were hard to overlook, but the desire to know who did it in the end kept me coming back.  Definitely a mystery that kept me guessing.

Meet Erica Coleman—a gifted and quirky private investigator with an OCD-like passion for neatness and symmetry, a penchant for cooking, (ten terrific recipes are included), and a weakness for chocolate.

Erica imagined that her trip to Florida would be a slice of heaven—a chance to get away from it all and catch up with her best friend, Wendy. But one day into her vacation, all hope of fun in the sun is dashed when she stumbles, literally, over a dead man on Wendy’s driveway. With police closing in on her friend as their main suspect, Erica must find the real killer before Wendy ends up behind bars.

With Erica’s skill, solving the mystery should be a piece of cake but then a second homicide-attempt hits close to home and generates a whole new list of suspects. There’s no way to sugarcoat it, a murderer is on the prowl, and no one is above suspicion.

As the plot thickens, it appears Erica may have bitten off more than she can chew, but she forges on, sifting through mounting evidence until she hones in on the killer who has a surprising motive for murder. With a dash of romance and some surprising twists, this thrilling mystery will keep you on the edge of your seat until the very last page.

Hmmm, could Erica be a female Monk?

I have Vandagriff's two other historical romances and enjoyed them, so probably will pick this one up--ebook style, too, although I'm not that wild about mistresses and such playing a prominent part in the picture.

Debra, I should probably clarify that the mistress doesn't play that big a role, she's just one of the obstacles of trust that Miss Sophie has to get over. And I just looked, the ebook is 99 cents, so that's a great price!