Review of Castle, Hawaii Five-O, and a Book: The Ugly Stepsister Strikes Back

Well, my friends, last night was a mixture of awesomeness and head-shaking.  Let's start with the awesomeness of Castle.

The new dynamic between Castle and Beckett is cute and fun.  After the dark of last season, we needed it as viewers I think.  I love the smiles and the hiding in the closet.  It was funny.  Although I am sort of sorry in the fact that I usually watch this show with my older kids and there seems to be a lot more sexual innuendo which wouldn't be appropriate, so a part of me is sad they're going this route on the show with the jokes etc. (i.e. the last elevator scene and pretty much the entire preview for next week) because it makes it cringe-worthy when you watch it with kids, you know? *sigh*

But there were things to love about the premiere.  I love Castle's grasping at straws speech to her and I love him offering to take her somewhere safe while she's cuddled in his arms.  I love how protective he is with her.  On the other hand, when they were in that almost demolished office building I said to the TV, Maddox is following you, you idiots.  And he was.  It makes Kate look like an inept detective when they do that.  I wasn't expecting the bomb, however, so I really liked that part.  And Ryan bringing over the pieces was funny.  That would be some puzzle.  I also liked Kate going after the senator, but if I had been playing a drinking game (or was a person who drank) and hypothetically took a shot every time they said file I would have most likely been drunk in the first fifteen minutes.  Or less.  (I think I would have anyway, but since I've never tasted alcohol I'm only guessing).  The point is, I think they said file four hundred times or more.  File! File! Who's Got the File!

So, overall, a good episode, a fun premiere, and in my opinion the season is off to a good start.

Christine Lahti is a great actress.  I love her mannerisms and her straightforward, sort of in your face, take it or leave it attitude.  Her scene with Danno was funny.  Although, I have to say when she was in the bedroom confronting Wo Fat, I sort of thought, since she's come back from the dead and Steve mentioned she knew Wo Fat's dad (and "killed" him) maybe Wo Fat is her love child.  Wouldn't that put a twist on it for Steve.  Ha!

I missed the McDanno this week.  The discussion in the car about Grace's custody felt like Steve was all, meh, just go to Vegas.  Follow your flighty ex-wife all over the country, it's okay.  Don't let the door hit ya on the way out.  It was odd.

Also, I had to shake my head at the shootout.  Would they really just start shooting with so many people in the line of fire?  That seemed so odd to me.  And I would have thought there would be a lot more pandemonium when a gunfight breaks out in traffic like that.  People were just sort of ducking and shrugging, like, wow, I could die in the middle of the street here.  Weird.

The highlight of the premiere was Chin Ho.  Daniel Dae Kim does emotional stuff really well.  The anger and grief, the heart-pounding action when he goes into that house and finds the bodies and his final confrontation with Delano were really well done.

And I am glad Catherine is on board now.  That should be interesting for Steve.  (Plus, I love the chemistry between these two actors.)

So, overall, a good episode for Chin.  The rest was okay.  Hopefully the rest of the season will help find its groove.

The Ugly Stepsister Strikes Back 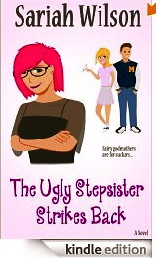 Sariah Wilson's new book, The Ugly Stepsister Strikes Back, is hilarious.  It's about a high school girl with pink hair who has a beautiful stepsister.  The stepsister is also beautiful on the inside, does charitable work, everyone loves her, she's nice.  It's easy to count the wrongs when you're the ugly stepsister.  But it also sets up some really funny dialogue.  I laughed out loud too many times to count.

Matilda hates her name and is madly in love with Jake, her stepsister's boyfriend.  The book opens with Mattie going to detention for saying mean things about Mark Twain to her Mark Twain-loving English teacher.  Jake, the boy she secretly loves is also in detention and the events that happen there give Mattie pause to think she has to change some things about her life.  So she does and winds up running for class president.  What follows is a story of fun and romance with some good non-preachy life lessons thrown in.  The voice in the main character, Mattie, makes the whole thing.  I thought it was definitely a book I'd recommend to anyone with teenagers or who just want to read a good teen romance.  (And don't let the cover fool you.  It may look juvenile, but the writing is exceptional).

Everyone knows how all those fairy tales go. The princess gets beautiful, nabs her prince, falls instantly in love, lives happily ever after and leaves her evil stepsisters in the dust.
But what happens when you’re the ugly stepsister and your obnoxiously perfect—read pretty, smart, and, worst of all, sickeningly nice—stepsister is dating the charming, tall, devastatingly handsome guy you’ve had a thing for since you were nine years old?Quirky, artistic and snarky Mattie Lowe does not lead a charmed life. Her mother is constantly belittling her on Skype. Mercedes, the school mean girl, has made it her personal mission to torment Mattie. But worst of all? Her stepsister Ella is the most beautiful, popular girl in school and is dating Mattie’s secret longtime crush, Jake Kingston.Tired of being left out and done with waiting for her own stupid fairy godmother to show up, Mattie decides to change her life. She’ll start by running for senior class president against wildly popular Jake. Ella can keep her Prince Annoying. Mattie’s going to rule the school.And no one, not even a cute and suddenly flirty Jake, is going to stop her.
Posted by Julie Coulter Bellon at 12:00 PM

I felt pretty satisfied with Castle last night. I agree, a fair amount of sexuality, but I suspect that will tone down over time.

The scene with Kate trying to sneak out of Castle's apartment was just fun. It feels kind of cliche for them to be hiding the relationship (as she says, from a bunch of detectives) but, whatever.

My only real complaint was that Esposito gets this guy to hack into the DoD and then ... (stuff happens behinds the scenes) ... and he shows up at the building where the two are locked in the bathroom. How... did that happen? Did a scene get edited out? It would make more sense if he tracked the car Kate and Castle are in, but if that, what did that other search turn up?

Also, not a complaint, but if a character says it would be better if he disappeared, and then he appears to die under suspicious circumstances... doesn't it seem likely that he faked his death in order to disappear?

Jon, correct me if I'm wrong, but didn't Espo say he tracked the guy's car there from the license or something and then saw Kate's nearby? I thought I remembered that.

Yeah, as soon as Kate and Castle left I knew that guy was a goner. A little cliche. I hadn't thought of him faking his own death. It would be awesome if he did and came back for the trial.

I did like seeing Ryan in charge of an investigation. I really like him as a character.

I told you Ugly Step-Sister was cute!

Oh dang. I still need to review it. I'm so behind in my reviews.

I was worried about how this season would carry over from the last, but I'm actually pretty pleased with it. I like all the fall colors and cooler weather but was bummed about winter coming until I remembered some of my favorite shows starting up again. :)

Shanda, which show did you mean? Hawaii Five-O or Castle? Just curious.