Today I want to tell you about a book by French author David Khara. It is a thriller, called The Bleiberg Project and it's about experiments that started under the Nazi regime and an organization that have continued that work to present day.  A novel concept to be sure with lots of intrigue.

It has a strong plotline, but the thing that stood out to me was the way it mixes a lot of history with events taking place in our modern world.  I liked learning more about that time period.  It was fascinating to me to look at history from that perspective, but of course this book isn't all history and mostly takes place present-day, but the things I learned made me think about what was suffered by millions under Hitler's regime. There were times, however, when the switching back and forth between Nazi Germany and present-day was confusing and I had to go back to the chapter head to see where we were. So, as much as I enjoyed the history parts, it was sometimes jarring to be taken out of the story for them.

There were also a lot of point of view changes from the main characters to minor villains.  That had its advantages because if I didn't like a particular character, I merely had to read a page or two more and I would be in someone else's perspective.  I think my favorite character was the Israeli hitman who had a history and background and a way of looking at things that was fascinating.   (As a note to my gentle readers, there is also swearing throughout the book and violence but not a lot of gore.)  I liked reading something different from a French author and thought they had solid writing skills.

There is a giveaway associated with this book.  Anyone who comments in the comment section will be entered into a drawing for a .mobi or epub version of the book.  Here is more info on the title. 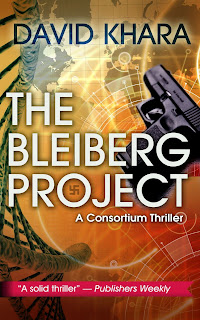 The Bleiberg Project
Could secret human experimentations be
carried out worldwide?

a thriller with action, killings, this has a WWII element
Genre: thriller/espionage

Synopsis
1942, Poland. The head of the SS meets secretly with a scientist in charge of a major Third Reich project. Present day. After late night with yet another woman whose name he doesn’t remember, self-pitying golden boy trader Jay Novacek learns that his long-lost father has died, precipitating events that lead him to board a plane to Zurich under his real name, Jeremy Corbin . He’s got a Nazi medallion in his pocket, a hot CIA bodyguard next to him, and a dangerous Mossad agent on his tail. What was his father investigating? Why was his mother killed ? Why are unknown sides fighting over him with automatic weapons? Far from his posh apartment, he races to save the world from a horrific conspiracy straight out of the darkest hours of history. Can it be stopped?

The Bleiberg Project won the Blue Moon prize for best thriller and has sold over 100,000 copies already. It is being made into a movie.

Buying links:
For your Amazon Kindle.
For your Barnes & Noble Nook.

Praise for The Bleiberg Project
“Fascinating, written with a sharp style, shock value and a lot of humor.” – Serge Perraud, www.lelitteraire.com.”
“Impossible to put down.” – France Inter

About the Author
French author David Khara, a former journalist, top-level athlete, and entrepreneur, is a full-time writer. Khara wrote his first novel—a vampire thriller—in 2010, before starting his thriller series. The first in the series, The Bleiberg Project, was an instant success in France, catapulting Khara into the ranks of the country's top thriller writers.
http://www.lefrenchbook.com/our-authors/david-khara/ 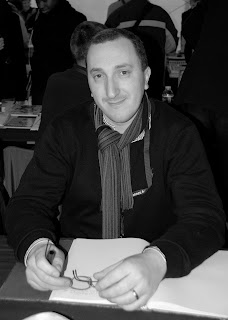 Hmmmm, you would be drawn to a thriller, but French? How'd you hear about this one? Don't know if I can handle bouncing around so many perspectives. I have a hard enough time with a single POV. lol.

I can't help it, but the author looks French. Is that possible?

This one was a review request and it looked interesting so I took it. You know how I can't resist thrillers! :)

Thanks Julie for taking the time to read this. Debra, yes the French write a lot of thrillers. Not a lot are translated through, which is why I started Le French Book to publish translations of mysteries and thrillers from France.

thanks Julie for your great review. Is there a way you can also had a link to France Book Tours? You have a comment here asking how you found this book. Maybe they would be interested in reading other books by French authors or on France.
Right now French thrillers are a big trend, I even read an article saying that French crime fiction is getting more popular than the Swedish one!!
Emma

Emma thanks for the suggestion. I am still at the hospital with my son but will add that when I am home.