Book Review and a Giveaway!

First of all, I want to tell you that tomorrow is the official online book launch of Pocket Full of Posies!  I am doing a joint book launch with Jordan McCollum and we have TONS of great prizes.  It's going to be fun and we'll be announcing winners all day long on Facebook and Twitter so I hope you'll join me.  You can get a jump start on entering for the grand prizes below.  Go do it! 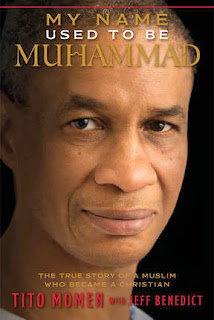 Today's book review is so pertinent to the day.  Since today is Veteran's Day (Remembrance Day for my fellow Canadians) and I always feel tender toward those who sacrifice for our safety and freedom, this book My Name Used to be Muhammad really spoke to me.  Tito Momen was born in Nigeria and was raised a strict Muslim.  This book is the story of his journey in finding Christianity and losing his freedom and it is phenomenal.

He doesn't pull any punches.  He talks about his childhood and what his father expected of his son who was destined to become an imam.  He talks about how women were treated, especially his mother, and how difficult life was for her.  The story follows him as Tito goes to boarding school, then college, falls in love, and starts to see more of the world around him.  He has brushes with the Muslim brotherhood and with western culture.  His impressions are starkly portrayed and I was completely drawn in.  When he embraces Christianity and is reported, he ends up sentenced to life in an Egyptian prison.  As we go through his prison experience with him, I was amazed at this man and so very grateful for the freedom of religion that I have.

This is a book you don't want to miss. It has an easy style to it and the story is riveting.

The True Story of a Muslim Who Became a Christian.

Tito Momen was raised Muhammad Momen. He was born in Nigeria and was taught to observe the strict teachings of Islam. At age five he woke at 4:45 every morning to attend the mosque and perform dawn prayer with the other men in his village. Training to memorize the Qur’an began at age six. It was at this same age that he began copying the entire Qur’an word for word. He was being raised to emerge as a leader among clerics, capable of leading a jihad, or holy struggle, to convert nonbelievers to Islam. However, Tito’s path took an unexpected turn when he was introduced to Christianity. His decision to believe in Jesus Christ cost him his family and his freedom. Tito thought he would spend his remaining days enduring a life sentence in an uncivilized Egyptian prison. For fifteen years he suffered and waited and prayed. Tito said, “I never gave up hope. I never stopped believing.” Although he was falsely imprisoned, beaten, and ridiculed, Tito’s remarkable true story is one of faith, forgiveness, and testimony that God does hear and answer prayers.
Posted by Julie Coulter Bellon at 4:05 PM

Who wouldnt want to read such awesome Books??!!! I would love to win either series!!! they sound awesome and i love clean christian
drama series!!

I want to read these because it's not something I usually read. After reading the blurbs on these, I'm intrigued. I think this may be a new genre for me to try out. Thanks for the chance!