A Book Review! And Ornaments Too! 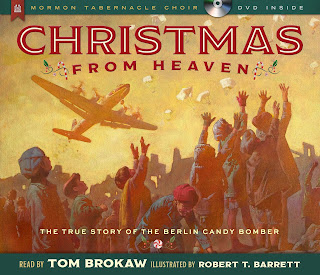 I am so excited to share with you and awesome book called Christmas From Heaven: The True Story of the Berlin Candy Bomber.  It's a children's book about the Gail Halvorsen and how he became the Candy Bomber.

He was delivering flour to war-torn Germany when he noticed a group of children over by the fence.  He went over to talk with them and wanted to give them some candy, but all he had with him were two sticks of gum.  He gave those and watched as they were divided up into the group.  This gave him an idea of what to do with his candy ration and some white handkerchiefs.  The humanitarian effort quickly expanded and this book shares a wonderful story with beautiful illustrations.

My five year old and I read it together and she looked at all the pictures while asking questions about the kids who got the candy from the sky.  It was a nice reminder that even in an uncertain world there are still pockets of peace to be found in individuals who look for it and help create it.  I loved all the little extras that were included, even a picture of the thank you letters some of the children sent, but most of all I loved the DVD that came with the book of Tom Brokaw reading it along with the Mormon Tabernacle Choir.  Definitely not one you want to miss.


"From little things come big things," Gail Halvorsen remembered his father saying. As a twenty-seven-year-old American pilot, Brother Halvorsen's job was to airdrop much-needed food and supplies to the people of West Berlin in the aftermath of World War II. But it was his simple gift of two sticks of gum that launched an extraordinary humanitarian endeavor and earned him the nickname "The Candy Bomber." Each day as hundreds of small white parachutes delivered treats to the children of West Germany, the wounds of war began to heal. "Operation Little Vittles" captured the imagination of people everywhere, bringing the spirit of Christmas to a world in need of peace and hope.

Famed broadcast journalist and author Tom Brokaw brings this remarkable true story to life in a stunning live performance with the Mormon Tabernacle Choir, captured on the accompanying DVD.
Also included in the book is a template and directions for creating your own "Candy Bomber" parachutes.

The second thing I wanted to tell you about is an heirloom ornament set of stars with the different Biblical names of Christ.  They are really sturdy, (made of metal) which is important to me as a mother of lots of kids, and they are a great reminder of what this season is really about and what the star that appeared that night meant for mankind.  I'd like to use each one as a family home evening piece and discuss why Jesus would be called that name and where it is in the scriptures.  Lots of ideas are running through my head on how to stress Christ in my family Christmas this year.

Click here is the purchase link for the ornaments where they are exclusively available. 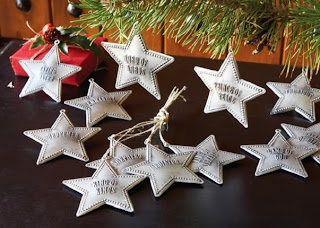 Posted by Julie Coulter Bellon at 9:28 AM