My New Book Cover! What Do You Think? 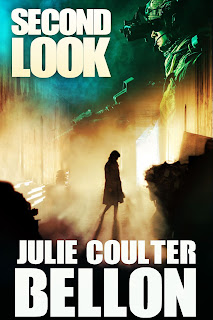 I have a new romantic suspense coming out soon and I can hardly wait for you to read it! It's called Second Look and it's the fourth book in my Griffin Force series. I am so excited to share this one! I think it's been one of my favorite to write.

Here's the cover and back copy. What do you think? *bites fingernails*

When the most wanted terrorist in the world escapes from a high security prison, Nate Hughes is part of the task force sent to recapture him. During the mission, he meets Abby, and she seems like every other intelligence officer he’s ever worked with---focused, capable, and confident. Nate assumes she’s one of the good guys, but when her past is revealed, her loyalties are called into question. Could she have turned against the country she once held dear?

With a terrorist attack imminent, Abby seems to be the only person in a position to help them stop it before it happens, but if she is a traitor, all is lost. Nate must make a choice to either trust her or turn her in---and the wrong decision would clear the path for the largest attack on freedom the world has ever seen.

And time is running out.
Posted by Julie Coulter Bellon at 10:49 PM

I love the new cover. Very cool and intriguing. I love the interplay between light and dark.

Thank you so much!