Book Review: The Power of Starting Something Stupid 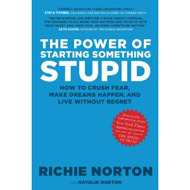 So, yesterday, while I was at my son's bedside, I was reading a book called  The Power of Starting Something Stupid by Richie Norton.  It's a quick read, but it's really quite profound.  The author starts out by telling about Gavin, his 21 year old brother-in-law who passes away in his sleep.  He then talks about his son Gavin who also loses his young life.  Believe me, reading that, while in a hospital waiting for my son to come back from surgery made me all weepy.

But there was a point to it.  He talks about Gavin's law---Live to start and start to live.  We are all waiting for something---more time, more energy, whatever it is, but sometimes we forget that there is a limited amount of time.  Don't spend it all waiting.  Start something.

He goes on to describe all the ideas that were once called "stupid."  The author mentions the story of Sara Blakely, the founder of Spanx.  She said, "she approached several lawyer who thought her idea was so crazy that they later admitted thinking I had been sent by Candid Camera." But even so, she persisted with her idea and became the youngest self-made female billionaire.  There were other examples, like when Walt Disney was fired by a newspaper editor who said Walt had no imagination or good ideas.  But the thing was, none of these people ever gave up on their dreams or their "stupid" idea.  There was one quote that sometimes a smart idea is masked by the label of stupid.  I like that thought.  We should examine our ideas more closely to see if that's true or not.

Another favorite chapter was Will I Regret This When I'm Eighty.  And Overcoming Procrastination.  Oh and the chapter Whatever It Takes. (Which, incidentally, is the Facebook page and motto of my nephew, Tyler, who is currently battling a brain tumor and doing "whatever it takes" to win his fight.  Of course that goes right along with what the author is saying, that there is nothing like staring death in the face to strip away all the things that don't really matter and focus us on what does matter.  Especially when we're starting something "stupid" that others think will not work, but a part of us knows we have to try.)

Each chapter in the book had me nodding my head.  They were things I'd thought of before, but never quite put into words.  This book puts it out there.  The thing I liked most about it was how easy it was to read, that it was full of examples of people who had "stupid" ideas and persevered and made it through all that.  There are quotes sprinkled throughout that are thought-provoking and yet it still stays conversational.  It moves from a "thought phase" to an actual "let's do this phase," which I also liked.  I have some "stupid ideas" that I might just re-think after reading this book.

What if the smartest people in the world understand something that the rest of us don’t? (They do.) What if they know that in order to achieve success, they will sometimes have to do things that others may initially perceive as stupid? The fact of the matter is that the smartest people in the world don’t run from stupid, they lean into it (in a smart way).In The Power of Starting Something Stupid, Richie Norton redefines stupid as we know it, demonstrating that life-changing ideas are often tragically mislabeled “stupid.” What if the key to success, creativity, and fulfillment in your life lies in the potential of those “stupid” ideas? This deeply inspiring book will teach you-How to crush fear, make dreams happen, and live without regret.-How to overcome obstacles such as lack of time, lack of education, or lack of money.-The 5 actions of the New Smart to achieve authentic success. No more excuses. Learn how to start something stupid—the smartest thing you can do.Drawing on years of research, including hundreds of face-to-face interviews and some of the world’s greatest success stories past and present, Richie shows you how stupid is the New Smart—the common denominator for success, creativity, and innovation in business and life.
Posted by Julie Coulter Bellon at 2:22 PM

Perfect! While I don't have an invention waiting in the wings to bring out, I "learned" this past writer's conference that paranormal doesn't sell. I've had a paranormal thriller trilogy that I've wanted published for years now, but I guess that plunges me into the stupid category for planning to indie-publishing it. Great! I can't wait to be lined up with the rest of the successful stupid people.

Just wondering, Julie...did you know the content of the book before you started reading it in the hospital while your son was in surgery? I mean, the others around you must've seen you weeping, and it probably tore their heart out.

Since the Kindle version and hardcover were only cents apart in price, I bought the hardcover. I'll have it by the 4th of April. It's a Shadow Mountain publication. I was surprised, considering how many endorsements it has. Truly inspiring. Thanks for reviewing it, Julie.

No, I didn't know what the content would be when I started reading it. And the nurses were really sympathetic to me yesterday, and very caring. Thank goodness for compassionate people.

There are some really great endorsements of the book (and big names!) and I can see why. It really was good. :)