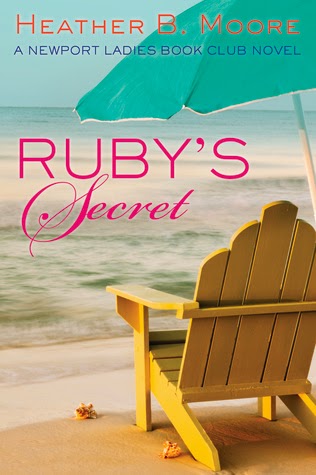 I have read a few of the Newport Ladies Book Club, but I think Ruby's Secret by Heather Moore is my absolute favorite.

Ruby is the one who starts the book club (that all of the books are centered around) and she's trying to spread her own wings after her husband's death. Her daughter-in-law is encouraging her to do things with people her own age, so just to say she'd tried, she goes down to the local seniors center.  While there, she meets some interesting people who encourage her to talk about the travels she took with her late husband. Before you know it, Ruby is off on her own adventure to Greece.  (And I have to admit, having been to Greece myself I loved the fact that this was where the book was going. Sigh. I'd go back there in a heartbeat!)

Things get complicated for Ruby because she's promised never to give her heart to another man again. Her husband was unfaithful to her and really wounded her soul and she just doesn't want to open herself up to that kind of hurt again.  But she meets Gabriel, the tour guide on the trip, and ooh the sparks are flying.  I seriously wanted to read this book in one sitting it was so good, but I had to stop for meals and mom duty. Every second I had, though, I picked it up.  And the ending was totally worth the sacrifice. Sigh-worthy!

At age sixty-two, life is finally beginning for newly widowed Ruby Crenshaw. Her son is grown and gone, and after long years spent as a loyal wife to her charming but unfaithful husband, she’s ready to live the life she’s always dreamed of. Her resolve is firm: she’ll never make the mistake of giving her heart to another man.

The first step in Ruby’s quest for a carefree lifestyle was to create the Newport Ladies Book Club, an unlikely gathering of women who have been her haven. Now she’s ready to take her newfound independence a step further—along with her friends from the local senior center, Ruby is jetting off to a much-needed Greece adventure. What she isn’t prepared for is Gabriel—the group’s tour guide—a native Greek and a true gentleman. His unquestionable charm is hard to resist. But resist she must—because no matter their growing attraction, Ruby is not about to fall for charming again!
Posted by Julie Coulter Bellon at 10:19 PM

Ohh! This sounds good. I wonder if I have it in my Kindle, already.