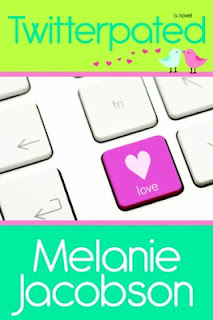 I have been a fan of Melanie Jacobson's books since her first one came out.  She has a witty style of writing that appeals to me and she does relationship stuff really well.  Twitterpated is no exception.

Our heroine is Jessie, a girl who has shied away from relationships ever since the guy she dated through high school and beyond decided to marry someone else.  She becomes engrossed in her work, even though she says she doesn't really love it, and has a rivalry with another manager at said work that pretty much gives her something to live for.  Her roommate tries to help her social life by signing her up for an LDS dating site and she does meet someone on the site who is normal and fun and wants to date her.

Ben has his own emotional baggage though, from a broken engagement to a girl who was a workaholic.  He gets a lot of mixed messages from Jessie, and he seems a little concerned about her work issues, but he doggedly pushes on.  I loved Ben.  I thought he was a great hero and he was an incredibly patient person.  Which made me not as sympathetic to Jessie because she kind of came across as . . .  well, whiny to me.  "I can't go out, I have to work" sort of thing.  Her roommate calls her on her inabilities to commit (because some guy dumped her four plus years ago---which made me say huh?  Really?  You're still hung up on that?  Weird.)  There were more than a few times where I shook my head at Jessie's actions and excuses.  It did set her up for some great stuff from her roommate, though.  I loved her roommate Sandy.  Sassy, fun, and a lot of depth.  (I sort of loved her more than Jessie.  I don't know why!  She just really sparkled.)

Anyway, it's a cute book about a relationship between two people trying to overcome a lot of baggage.  It wasn't the stay-up-all-night-to-see-what-happens kind of book that I found her other books to be, but I still enjoyed it and look forward to her next book (which I heard is about Sandy, the roommate).  If you're looking for a fun romance then this is the book for you.

Jessie Taylor is furious when her roommate secretly posts her picture on the dating website LDS Lookup, furious, that is, until she spends all night instant messaging Ben Bratton, a man whose wit and warmth just might make Jessie forget the train wreck of her last romantic relationship. Their first date is a smashing success (literally), but Ben's overall awesomeness can't save Jessie from having to deal with Craig, her competitive coworker whose baiting behavior sets new standards for obnoxiousness. Determined to beat Craig at his own game, Jessie spends long office hours finishing projects and putting out fires, but while her performance wows her boss, it only makes Ben skittish, after a failed engagement to an up-and-coming lawyer, he's not about to pair up with someone who's married to her job. Will Jessie figure out how to be true to herself and take her big chance at love before it's gone with a click of the mouse?
Posted by Julie Coulter Bellon at 10:42 AM

You know what I love about Melanie's book? I think seeing her name so big and boldly printed on the front is fabulous. The author is important to the book as much as the title and colorful cover.

The romance sounds great, and if I can find this for my Kindle, I will own it before the sun sets. :)

I've been wanting to read this book! Hopefully I'll get to it soon :)

I'm so glad you liked it. It was actually the very first book I ever wrote (which may explain why you felt like some parts didn't hold together) and I was very nervous for it to go out into the wide world after the first two books. But after I had a chance to dig in and edit it, I felt pretty good about where it ended up compared to where it started. It's fun to see how much I've changed as a writer since the early days. Thank you for taking the time to review it!