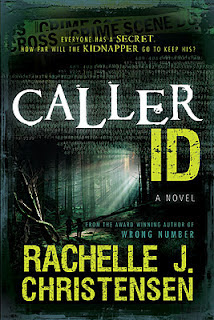 I know I usually do book reviews on Tuesdays, but I'm part of Rachelle Christensen's blog tour for her new book, Caller ID, and somehow I got scheduled for a Monday. So I apologize and hope you will bear with me in the change of plans.

Rachelle Christensen is a fairly new author since her first book, Wrong Number really burst onto the suspense scene two years ago. Rachelle had a way of ratcheting up the tension a little higher with each page in that book and I really enjoyed the sprint to the final scene. I couldn't seem to read Wrong Number fast enough, so I was pretty excited to get my hands on her new book, Caller ID.

In Caller ID we meet Courtney Beckham, a rich girl who is out for a run with her boyfriend. We get hints that she's more than just a pretty face, and she tells herself she's not spoiled, but in the first few chapters I have to admit I had a hard time liking her. She seemed like a player (has a boyfriend while kissing someone else, although there is some hinting that she's suffered some trauma in the past that makes her act this way) and more often than not she acted so childish I couldn't really identify with her. I kept plugging along, however, and I'm definitely glad I did.

After disobeying her father, Courtney stumbles onto something she shouldn't have and ends up kidnapped. Beaten, bruised, and with a kidnapper who seems to enjoy her pain, Courtney is left with only her wits to help her escape. There were times when I questioned her actions and the turn of events, but by mid-book I was hooked and felt the familiar pull of action that Christensen had displayed in her previous book. From the middle to the end was definitely a roller-coaster ride as the reader is right there with Courtney experiencing the myriad emotions of someone who knows a secret she shouldn't while trying to stay alive.

I have to say I enjoyed the quirks of our FBI hero Jason Edwards---the kind of guy who never gives up and never surrenders. (I love you Galaxy Quest for that quote alone.) I liked the interplay between Courtney and Jason and thought the undercurrents between them were subtle and well done. The suspense is definitely the strong suit in this novel, but the dash of romance and the twists the case takes really make the ending worth the wait and earns this book a place on the keeper shelf.

When twenty-three-year-old Courtney Beckham is abducted near her home, the search turns up more than just a kidnapping crime. FBI agent Jason Edwards investigates the ten-million-dollar ransom and stumbles upon something he wasn't meant to find. When Courtney catches a glimpse of the caller ID in her kidnapper's home, what she sees turns her world upside down.


Want a New Camcorder? You Can Win One is Rachelle's Contest!

To celebrate the release of CALLER ID, Rachelle J. Christensen, is hosting a contest for a new Ultra Flip Video Camcorder (4GB memory, Records 120 minutes Value $149.99) and other great prizes. There are multiple ways to enter between now and April 14, 2012. Winners will be announced and notified April 16, 2012.

For additional ways to enter, go here to Rachelle's blog and click on the Contest tab.
Posted by Julie Coulter Bellon at 11:40 AM

Wow, that does sound like a suspenseful read. And with a draw like a camcorder for a prize, this blog tour will sure to have many hits, huh? I didn't mind you deviated from your norm, Julie. It's nice to chance things up once in a while. I guess I'll have to think about having a cool prize for when I have a book blog tour after my first book is published. I'll need to think about it. If it's the one about juvenile fire setters, then maybe a portable fire extinguisher and a book of matches? And if it's the book about John Dillinger's lost guns, then . . . no, never mind. Can't do that.

I have not read these books, but both sound like something I'd enjoy.

The titles alone of both of these books would make me want to check them out.