I'm excited to tell you about a new author I found named Laura Beers. Her debut novel, Saving Shadow, is a regency spy novel with a heart and I got an interview with her as well that you won't want to miss!

Lady Elizabeth Beckett, the Duke of Remington's daughter, has a photographic memory. When her Uncle Charles, a spymaster, becomes aware of this, he makes Lady Elizabeth into a spy: code name Shadow. But when a mission in France goes awry, Lady Elizabeth begins to question her future. Her goal in life has been to capture and bring to justice a man who cruelly abducts and sells women into slavery. But is the price too high?

I love historical romance and adding a spy theme into it really ramped up the tension. The plot was unique as the villain, who is a sex trafficker, and slowly being caught in the web that Eliza draws around him, yet he still has some tricks up his sleeve. The author did a nice job with details from the time period, and showcased many societal restrictions on both women and the poor. The social issue of enslavement is tastefully done and there were several surprising twists and turns to the plot that kept me turning pages to see the fallout.

The book also has a romance when our heroine is partnered with Benedict, a fellow agent who has lost his brother. Benedict was a hero with a great backstory and while the romance between Elizabeth and Benedict will draw readers in, it was a little rushed and missing some emotional beats. Readers will still feel for both Benedict and Eliza as they work through their issues, though, and want them to get their happily-ever-after! The secondary characters of Eliza's brother and butler were nicely fleshed out and I'm really looking forward to reading the second book in the series which features her brother, Jonathan. For a debut novelist, Laura Beers has won a spot on my Authors to Watch list.

Since I enjoyed her book so much, I asked Ms. Beers for an interview and she was gracious enough to grant me one! Read on to find out all her secrets! 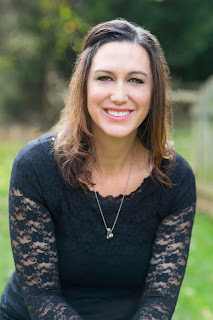 Tell us about your publishing journey. Have you always wanted to be a writer?

Laura: When I was younger, I would dream about becoming a writer, and would sit at our word processer and type out stories. I also dreamed about being a lawyer, President of the United States, a princess, an astronaut, an FBI agent, and a spy.

About two years ago, I decided to start writing the story that had been playing in my head for over a year. It was a rocky journey as I started writing my book because I had no technical writing skill or experience. Luckily, I had smart friends that patiently taught me the nuances of the English language, while treating them to “In and Out.”

Where did you get the inspiration for your novel?

Laura: I started daydreaming about being a spy during the Regency period. After all, who hasn’t thought about being a spy, especially a spy that can throw daggers, decipher enemy codes, and outwit an evil villain?

If you could live in the Regency period, would you? Why or why not?

Laura: I would love to live in the Regency period, assuming I was nobility and an heiress.

What does your family think about your writing?

Laura: My husband is very supportive and has thoroughly enjoyed my first two books (his words). However, my kids are far more interested in Minecraft than they are about my books.

Do you listen to music when you write? Have a snack you always have near you when you're writing? Any writing quirks?

Laura: I don’t listen to music while I write because I am easily distracted. As for a snack, I love pink Starburst, not red, not yellow, but pink. I never get tired of those delicious, pink, chewy treats!

What book are you reading right now?

Laura: I just finished Christmas Confection, by Shanna Hatfield. I am a huge fan of regency period and early western romances.

What was your favorite childhood book?

Laura: My favorite books growing up was Nancy Drew. She was everything I aspired to be when I was younger: talented, kind, popular, and she could solve mysteries after school. Whenever she teamed up with the Hardy Boys, I would curl up on the couch and read the book in one sitting.

What are the hardest scenes for you to write? Kissing? Action?

Laura: I find that action scenes are fun but challenging to write. Luckily, my books revolve around a spy family so I get a lot of practice writing action scenes.

What project are you working on now?

Laura: I am continuing to work on the Beckett Files. I am currently writing the 4th book, the 3rd book is with the editor, and the 2nd book, A Peculiar Courtship, was released on December 1st.

Lord Jonathon Beckett’s mission is simple: retrieve Lady Hannah and place her under the protection of the Crown. But he isn’t prepared for the havoc she inflicts on his world, making him question whether his duty as an agent of the Crown should always come before his heart.

Lady Hannah's father has uncovered evidence exposing a French traitor to the Crown. Willing to do anything to silence him, the traitor's primary target has become Lady Hannah. Keeping her safe means locking her away from Society, but she refuses to stand idly by, letting others put their lives on the line to protect her. Instead, she will stop at nothing to learn to defend herself, even at the risk of losing Lord Jonathon’s protection, or his affections.

With a sinister scheme in play to collapse the English government from within, Lord Jonathon must protect Lady Hannah from the French spies intending to use her as a pawn in their game of treachery. But can he protect her from herself?

Tell us one unique thing about you that not many people know.


Laura: I have sweet dances moves that I love to demonstrate when my kids have friends over.


You can find Laura on Social Media!

Born with a perfect memory, Lady Elizabeth Beckett has become one of the world’s most notorious spies, despite being the daughter of a duke. She is shielded only by her code name: Shadow. When young ladies of High Society begin disappearing from London, Eliza has no doubt who is orchestrating these crimes; a heinous man she has been investigating for years. Vowing to save them before they are sold to the highest bidder, she must risk everything to stop him.

Lord Sinclair was perfectly content being the second son of a marquess, but when his brother is murdered, he is thrust into a position he has not been prepared for and does not desire. As an agent for the Crown, he is expected to retire now that he is the heir, but he’s been granted special permission for one more mission... to obtain justice for his murdered brother.

Used to keeping secrets, Lady Eliza and Lord Sinclair must learn to open up to each other when they are assigned as partners to bring down the same ruthless man and his brutal empire of abduction and slavery. As Eliza’s tainted past becomes too much for her to bear alone, can she learn to trust her new partner with her secrets, her life, and possibly her heart?
Posted by Julie Coulter Bellon at 3:40 PM